I so i’m creating a bot and i have a small problem.
https://pastebin.com/mVUbPQ1U
If you look at line 95 i have it set to if the message i get contains the ping it should respond with a pong but sometimes it just doesn’t respond and the bot gets kicked out from the IRC. how can i fix this? do i have the pong in the wrong place? should i have it in the ircClient.cs file? All help is wanted.
thanks

Gonna do that thanks, Will try that, but what difference does that make? i just want to to type it in the console, doesn’t it read from the IRC and not from the console?

It doesn’t seem to have fixed the problem, i think it might have to do with that i dont really have a super stable connection to the IRC channel so when it disconnects for like half a second it get kicked out, do you know any fix maybe?

super stable connection to the IRC channel so when it disconnects

Did you make the change to actually see if Twitch was sending pings that you were reciving?

Yha i can see the pings in the console 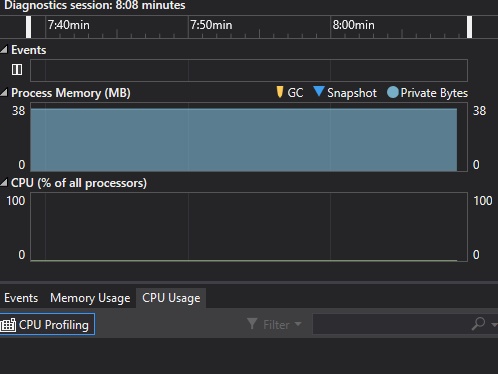 C# not my native language

Check if these posts help:

First time poster over here! I’ve recently started coding a Twitch Chat Bot, and it’s going pretty well except for a few runtime errors I can’t seem to figure out. I haven’t been keeping any repository of my code (stupid) so I can’t go back and see when they started. I’ve not had any real experience with networking code until now, so these may be silly and obvious but I haven’t been able to figure them out on my own. I currently have 3 runtimes I know of. 2 of which are more problematic. The …

Hey guys, i have the following situation: i connect (with a java lib) into the twitch chat and have no problems. after a few minutes i dont get any incomming message. the bot is always connectet to twitch and can send messages into the chat (al other can see it) but all messages from other (public chat or whisper) dont get to the bot. have you any idea?

Python BOT keeps disconnecting, even with PONGs Chat and IRC

Hello, I have an issue with my Python bot, I can make it connect and have it made to send PONGs to the server, but even then it keeps disconnecting and suddenly I can’t receive messages from the server. This seems to be especially prominent if the chat is inactive for a while, if people keep chatting it doesn’t seem to be an issue. On at least one occasion it has happened that it even disconnected before the first ping. Here is the least amount of code I can use to recreate the problem: imp…

3ventic Oct '16
You only need to send back PONG\r\n and it’ll work. There’s no need for the address after it.

Thanks, will try this

Ok so the problem isn’t the actual response AKA the pong, i just double checked and it does despond and everything but after something like 6-10 minutes it stops working, i think it has to do with that when my internet goes down for like 10 seconds it just disconnects and never connects back. any tips?

I’d look into an established IRC library that supports IRCv3 message tags and custom commands, or something Twitch specific like TwitchLib (in active development and much more than just chat) or TwitchChatSharp (mine and works but largely abandoned at the time).

So the problems I see:

Changed to NICK now, I know i might find stupid now but i downloaded TwitchLib and i dont know how to implement in

Use nuget for libraries when possible. It’ll make referencing them much easier.