I’m curious to see if there is a way for the camera that is directed towards the streamer to be separate of the twitch stream (not in a corner of the video)?

My reason for asking this, is I am trying to build an application where if you have a team of streamers streaming the same game in the same party you can choose a POV (one of the streamers you see what they see) and you can have the cameras off to the side so you can see everyones reactions instead of just the person you’re watching.

I’m not sure if I understand your question. The Twitch API doesn’t interact directly with the cameras. That would be software like Open Broadcaster (OBS). You could have multiple webcams hooked up to a PC and add all of those as capture devices in OBS in whatever configuration you’d like. For example, this broadcast has multiple remote broadcasters playing a board game.

Let me clarify. I stream off Xbox One, Twitch uses the Kinect camera to view the streamer. So say I’m playing Call of Duty Zombies with 3 other streamers in a party and they’re streaming at the same time. Is there a way to view only their Kinect camera while the viewer is watching only 1 POV? So a viewer is seeing what im seeing but to the side of that be able to see just the camera’s of the other people in my party. I have attached a VERY rough example of what im trying to accomplish.

So to make the image below make more sense imagine this… you and 3 of your friends are playing zombies on XB1, all 4 of you are in a party and streaming the same game. The viewer can see one players point of view while seeing everyones face (camera). Twitch has integrated with the console cameras, is there a way to be able to access those separately as shown below? 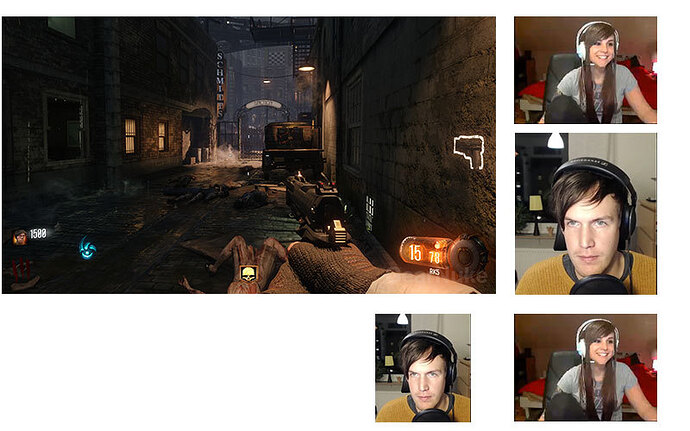 Thank you for the clarification! There is no way to do this. The Xbox One app only supports showing a single broadcaster.

Thanks, I didn’t know if this was something twitch had control of. I shall find a different way.