Hello, guys!
I wanted to create my own twitch chat bot, but something went wrong. My account’s channel on twitch is qowevisa. And so I wrote in .env file “CHANNEL=qowevisa”.
In my bot.py file I wrote these lines:

BUT. When I’m writing “pipenv run python bot.py” in my window’s shell, it returns me that kind of error

At a guess you need

But depends on the program. Channels are preceeded with a # for joining purposes. Like IRC

Thanks for very fast replying, but it didn’t fix the problem.

Screenshot_551146×541 48.6 KB
I tried to rename “the owner” in twitch developers tab, but only when I set every name to my own name it stopped sending me errors. It just was trying to load variables. I think it stopped working because in the channel was a viewer with the name “qowevisa”.
BarryCarlyon February 5, 2020, 6:34pm #4

Then the issue is somewhere else in the program you have written. Which we can’t really debug because it’s your program.

We’d need to see the source.

I tried to rename “the owner” in twitch developers tab

The name in the Twitch Developers tab/console. Assuming you mean https://dev.twitch.tv/console/ the “name” has no bearing on your programs operation.

I was copying the code and everything from 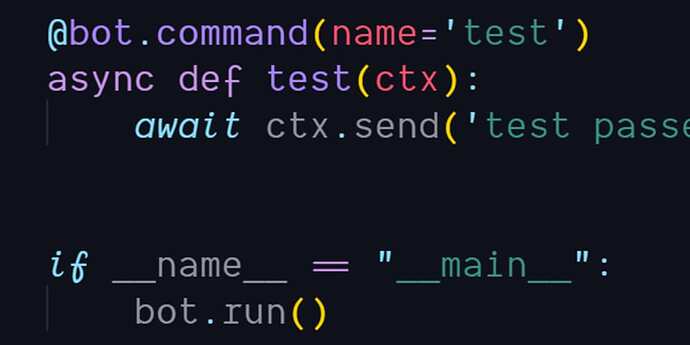 This tutorial gets you up and running with a simple chat bot for Twitch channel. Who's this...

But they said nothing about how shall I fill the .env file.
Just to clear everything. 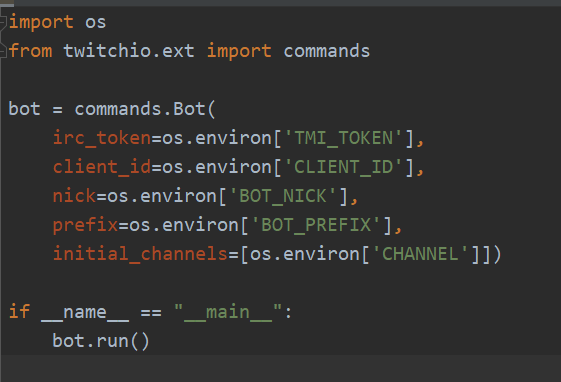 In my .env file TMI_TOKEN is oauth from Twitch Chat Password Generator
CLIENT_ID is Client_id in my app in twitch dev
BOT_NICK is just a name and I can set it to whatever I want
CHANNEL is my twitch account

Is it like that? If it is, okay, I’ll close this topic if I can and just go try it one more time and go trying to solve the problem by my own.

But they said nothing about how shall I fill the .env file.

in your .env the code seems to drop the ‘#’ so it’s not joining the channel. I’m not 100% familiar with python env file usage.

Could just skip using env for now and hardcode it to get your bot going.

Okay. So. I’m really dumb. I was trying to create a bot from my own acc. So I created another acc and everything is fine.
So, I think if .env and code are fine, your problem is that you’re trying to create yourself into a bot…

But the code should of worked fine using your account, as it authenticates using username + oAuth. shrug