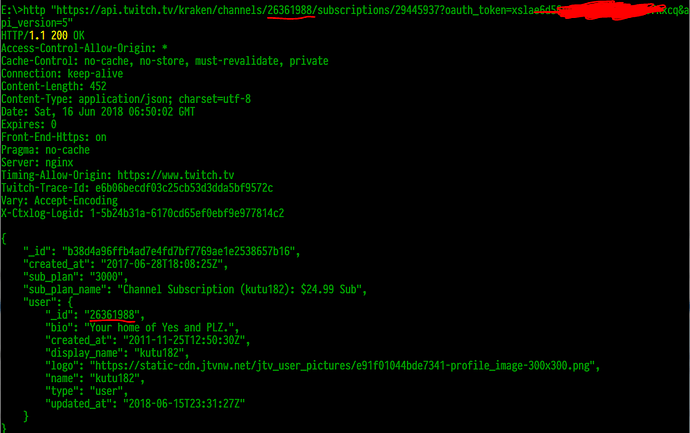 same issue for me. I can’t really switch over to the new API because their ratelimites are pretty restrictive and my app is growing…

What does you application do that the new rate limits seems restrictive?

Explaining your need might get you a higher limit.

@matt_thomas let’s see… 480 active users with oauth tokens at 120/min is… 1 request per user every 4 minutes… It’s because the limits obviously don’t scale, at all. We can’t use the rate limits either because they are no way near what we need for all our customers. And it’ll only get worse over time. It has to be by IP address or by access token. Period.

Also this resource is also broken for my app. Customers are complaining their subs aren’t getting rewards.

Instead of doing a user->channel sub check

Download the channels subscribers in bulk (at 100 subscriptions per page), say up to four times a day, and then you don’t have to waste API requests on the single lookups, and add in data from pubsub to catch subs as they happen.

BUMP, is this fixed already?

This is currently being looked into by the API Team

I’ve received confirmation from the subscriptions team that this issue has been fixed.

Yeah, this is not fixed.

You’re right. I’m seeing the same (unexpected) response for my own channel and checking in with the team.

eagerly awaiting this solution. i’m working on an app to assist amazon prime subscribers become twitch prime subscribers. pretty much can’t proceed until this is working. so glad to see an active staff member responding!

The subscriptions team has reproduced the error (showing channel object if that channel is also associated with the client id, rather than providing the expected “not a subscriber” message).

The bug is being tracked in a sprint. For Twitch staff, that ticket is SUBS-2010.

Please confirm it’s fixed now! I no longer get my own object, but rather a message that /Twitch does not subscribe to me. Yay.

A fix for this also came out today. Let us know if any other issue come up.