EventSub is expecting an unspecified Content-Type in verify response

I am trying to send a valid challenge response but they always fail because the Content-Type header field does not match what is expected:

If I do not include the Content-Type header it will also fail:

Everything is working correctly except for the Content-Type. This isn’t mentioned in the docs so I don’t understand why it’s even being considered.

I tried ignoring what the twitch-cli was saying and attempted to subscribe to the event, but those still failed, presumably for the same reason. (I’m not aware of a way to retrieve the failure reason.)

At this point I am stuck and don’t know what to do.

Any help would be appreciated.

Something is appending a charset=utf-8 to your intended content-type, in your code.

Which is invalid for the CLI and eventsub.

(I’m not aware of a way to retrieve the failure reason.)

The API will only report that it failed, not why. Thats what the CLI is for in this case.

This isn’t mentioned in the docs so I don’t understand why it’s even being considered.

You could (in error) conceivable return the signature as JSON in error with a JSON header, when it should be plain text. So it’s a “make sure the dev didn’t make a mistake”

Verify needs 200 + the challenge in plain text
Events need 200 ok or 204 No Content. (No Content will mean no content-type header to muck about with)

Nothing is appending a charset in my code. The Twitch CLI is doing that.

If I construct the response with this C code:

I get this response:

There is no charset being set anywhere in my code.

The Twitch CLI is doing that.

The CLI only reports the headers that your server returns.
The CLI itself doesn’t add headers.

You can test header response your senf by makign a curl request to your own server or using a HTTP Testing tool such as postman or insomnia and confirm it’s not the CLI at fault, since the CLI doesn’t add headers it only reports what your server returns.

This could be being added by nginx/apache or whatever is in front of your c code (if anything). 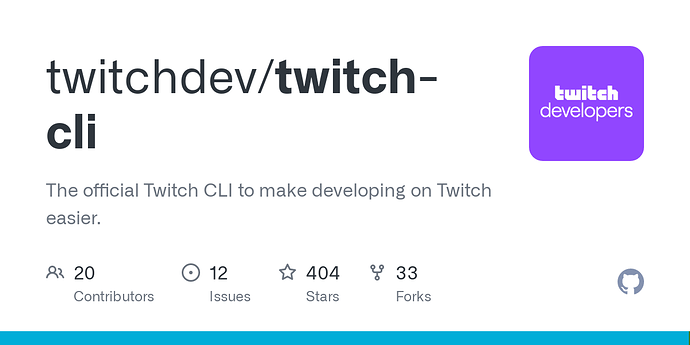 There is no reference to this in the code

and follow the code backwards. The CLI doesn’t modify headers it only reports the headers your server declares.

And since you are having the same problem with “real” eventsub, it’s your server not the CLI/Twitch.

As Real eventsub isn’t modifying the headers either.

After digging through this I found out it wasn’t my code but Cloudflare adding the charset.

I don’t understand why Twitch cannot support a charset being specified, nor why a completely nonsensical error message is being used.

This would have taken less than a minute to figure out with a proper error message, and frankly Twitch should be able to support UTF-8.

I don’t understand why Twitch cannot support a charset being specified, nor why a completely nonsensical error message is being used.

This would have taken less than a minute to figure out with a proper error message, and frankly Twitch should be able to support UTF-8.

The CLI is open source so you could device and submit a PR to resolve/adjust the error reporting.

The CLI is open source so you could device and submit a PR to resolve/adjust the error reporting.

I already have a job and nothing about using the Twitch API so far has made me want to keep using it, let alone work on it for free.

utf-8 is added by default, and cannot be changed, read:

No way to disable charset in Content-Type header?

I'm developing an API that will replace another API implemented in another langu…age. Because the clients for this API are implemented badly, they don't accept content types other than "application/json" this means that "application/json; charset=utf-8" breaks them. Currently, I've been trying to use this middleware before my routes to prevent the charset from being appended: ```js app.use((req, res, next) => { res.setHeader('Content-Type', 'application/json'); return next(); }); ``` I usually end responses like this `res.status(404).json('Not found')`, but with the middleware I'm using, it doesn't seem to work. I've tried to look at the Express code, and from what I can tell, if I use the Express function `set()`, `header()` or `type()` the charset automatically gets appended. So when I use the native `setHeader()` function I thought that would work. When I use the native method, it doesn't seem like it should be overridden, because the `res.json()` function checks if the header is already set before trying to set it, which also uses the native `getHeader()` function. Is there any way I can get around this, without changing how reponses are sent or am I doing something wrong?

Hey
Are there any plans for making changes so that UTF-8 can be accepted? I’m using laravel and there’s no way to remove charset=UTF-8 because it’s added last minute if it’s missing from content-type.

Are there any plans for making changes so that UTF-8 can be accepted?

Live EventSub doesn’t have this issue, it’s just a bug in the CLI

Which already have a PR merged to resolve

By submitting this pull request, I confirm that my contribution is made under th…e terms of the Apache 2.0 license. ## Problem/Feature This fixes #138 ## Description of Changes: - parse the content type header using the mime library - test the content type when present - report the charset if a charset is returned in the content-type header Example output: ``` ✔ Valid response. Received challenge [omitted] in body ✔ Valid content-type header. Received type text/plain with charset utf-8 ✔ Valid status code. Received status 200 ``` ## Checklist - [x] My code follows the [Contribution Guide](https://github.com/twitchdev/twitch-cli/blob/master/CONTRIBUTING.md#Requirements) - [x] I have self-reviewed the changes being requested - [x] I have made comments on pieces of code that may be difficult to understand for other editors - [x] I have updated the documentation (if applicable)