Hi, Im trying to get the game description via the api for the specified game
like in the image below 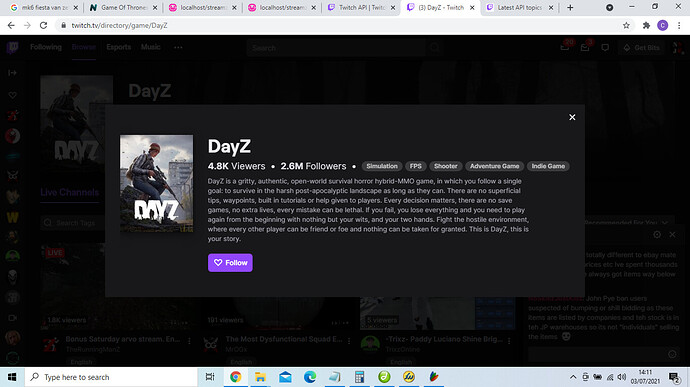 That description is not present on all games and not presented in the API to consume.

Whats Twitchs stance on scraping ?
For example would I be able to do a 1 off scrape of the description on the games I’ve indexed on Twitchs site or would that be forbidden ?

For example would I be able to do a 1 off scrape of the description on the games I’ve indexed on Twitchs site or would that be forbidden ?

The Alternative here is to use IGDB’s API

Video Game database on demand! Images, info video and other data you can retrieve trough the rest API

And I noted here, An easy way to go Twitch Category ID to IGDB Record

Add the IGDB game ID to the Helix Games Endpoint

Now that Twitch is utilizing IGDB instead of Giantbomb. Please add the IGDB Game ID to the Helix Fetch Game endpoint. https://dev.twitch.tv/docs/api/reference#get-games https://api-docs.igdb.com/#game Then we can easily lookup a game on Twitch...

Twitch’s DB is powered from IGDB.
But these descriptions are “custom” set on some categories (perhaps by the developer).
But you can pull game descriptions from IGDB instead, and a wealth of other data

Great thanks for the help.
Thought it was best to ask instead of just doing it …

Will check out the api you suggested

Hi,
I tried to get the game data for DayZ from IGDB
Dayz game ID is 65632 ( from Twitch )
However when I test in Postman it wont pull anything for that ID or a few others Ive tested

That’s because Twitch and IGDB use their own, separate, game id’s.

If you wish to query IGDB using a game ID from Twitch you need to use the External Game API as that way you can specify an ID, and which external provider (such as Twitch) that the ID is from.

Refer to my comment on the earlier linked UserVoice