In the last couple of weeks, we’ve been getting hundreds of these errors. Any way we can get some insight in to what’s going wrong here? I’m not seeing any pattern. Here’s an example of one of them:

422 usually indicates the user/channel is deleted or suspended. Have you checked the channels you unsuccessfully attempted to follow that they exist in good standing?

Just looked at one. Both follower and followee seem fine. Here’s the channel: https://www.twitch.tv/greekgaminguniverse

Any other ideas? It’d be nice if Twitch could provide some message.

The only other reason I can think of right now would be that the person following is already at 2000 followed channels, which is the maximum a single user can follow. 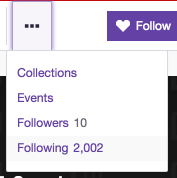 Anyone from Twitch here able to give us some kind of message we can feed back to the user there? Otherwise we’re going to have to do an extra lookup first.