I am currently having the same issue. I completed Path to Affiliate on the 24th of Sept. Immediately was able to and did complete Extensions Developer on-boarding, but never received the invite for Affiliate on-boarding. I have sent in help tickets twice and only received the Auto Reply. Also Tweeted to @TwitchSupport (https://twitter.com/TwitchSupport) with no response.

I’ve contacted Twitch help with this issue three days ago but no reply yet.

Also having this issue same as the 2 posts above this, I completed the Extensions onboarding but still can’t begin the Affiliate onboarding.

I’m having a similar issue. I received my Extensions Development Onboarding invite once I became eligible for the affiliate program (on the 11th of last month). I completed that onboarding within a few days, and have been waiting for my invite to the Affiliate Program’s Onboarding process ever since.

My extensions onboarding is definitely completed, and I have checked everywhere in my email (including spam), the main twitch site, and the twitch extensions developer site for anything I may have missed.
I have no idea what to do from here.

Same issue here… I recently obtained my Affiliate achievement and trying the Get Started link takes me to complete the Extensions Developer Onboarding (which has been completed and upon checking/validating all 4 steps show complete).

I’ve reached out to support on 10/14 and received a general message and then replied later that night explaining I need further assistance. As of today (10/17) I still haven’t received a new status as to this issue from support.

I’ve found this thread from researching the following pages;

This past weekend, I got my eligibility for Affiliate status, but saw that I still had not completed the onboarding for Extension Developers. I went and completed that immediate, and received an email in short order approving me for the program. I reviewed the documentation, and it seems like the main twitch site isn’t realizing that the approval has taken place, because the email I received should have been it. Whenever I click the Get Started button for Affiliate it just tells me that the Exte…

Conflict with Extensions and Affiliate? Extensions

I am currently having the same issue. I completed Path to Affiliate on the 24th of Sept. immediately was able to fill out the agreement and payment information for Extensions Developer, but never received the invite for Affiliate. I have sent in help tickets twice and only received the Auto Reply. Also Tweeted to @TwitchSupport (https://twitter.com/TwitchSupport) with no response.

I am having the same issue where i reached my affiliate path achievement and it made me do the onboarding extension where it asked me for my tax info and payment methods. Its been a couple of days and nothing is happening didnt get the invite yet to start affiliate. I emailed support but havent got a response yet. My twitch username is metalgearnemesis

Does anyone know if there’s a typical wait time to receive a response from twitch email support? Still haven’t heard back from the initial canned reply after a few attempts/replies back in from me detailing the issue and links to this thread.

Anxious to get my affiliate started and hoping to hear back but a little disheartened it’s taken this long without even a “we’re looking into it” response.

Yea its been a week for me now and no responses here , email support , and their twitter. I am anxious to start too, and my viewers are wondering when it will happen so they can sub. Just wish someone could email or answer my tweet that they see the problem and will be fixing it in the future doesnt have to be right this second. But I guess I will wait more because thats all I can do since they wont say anything.

For anyone else wondering (or in the same boat)… I received a response this morning from support asking me to validate my account information to prove I’m the owner. It seems like the start of the process but it did take 10+ days for me to receive this reply from my initial request.

I’m sure others just like me are anxious after reaching their goal but sadly it does seem like once you submit the issue it is a wait game until they get to your request (which is heard).

First off congrats to everyone on becoming affliate. I can’t get to the final step even tho all my info is correct.

Latest update… after confirming I was the owner of the account I did receive another response today (6 days from my latest reply) stating;

I can see that you are eligible for the Affiliate program, however there is a known issue that is preventing you from being able to complete your Affiliate onboarding at this time. This is a known bug we are working to resolve.
We greatly appreciate your patience as we investigate this issue.

We’re getting near the holiday season and I know my streaming will take a hit these next couple of months. Which just leaves the concern of when the bug is fixed if anyone who originally made the achievement is currently a little short… are we still able to complete the onboarding via grandfathered in or need to achieve the goal again?

To settle anyone else’s worries I recieved another response (very promptly) stating;

Once you reach the criteria and are eligible even if you do not maintain those stats afterwards you should not lose your invitation. We will do our best to do right by you and get you the invite to the program you worked towards once we resolve this issue.

So it looks like they are planning to keep invitations for anyone that made the achievement regardless of stats when it’s fixed.

I also recently had my Affiliate onboarding issue fixed due to the Developer onboarding glitch. I reached out for an update and the same day I received my invite via Twitch Notifications and a reply from support saying it should be resolved.

I’m unsure if it was just pushed through for anyone asking or if they globally fixed the issue for anyone experiencing this issue and I just happened to get a response from support.

I believe the “Extension Onboarding but not Affiliate onboarding” bug is now fixed. Good news is when I went to do the Affiliate onboarding it was already completed since it used my Extension onboarding info (all the same info). Kudos, really, to the Twitch support team keeping a ticket open for as long as they did (54 days, I didn’t bug them about it much).

Just wanted to give a heads up to others who are searching for this topic.

My Affiliate on boarding says that I entered in two different addresses and that they where different on both step one and step three but no matter how many times I try it wont work.

@I_Squirt_Bullets_PS4 I have the same problem, dose anyone know why? 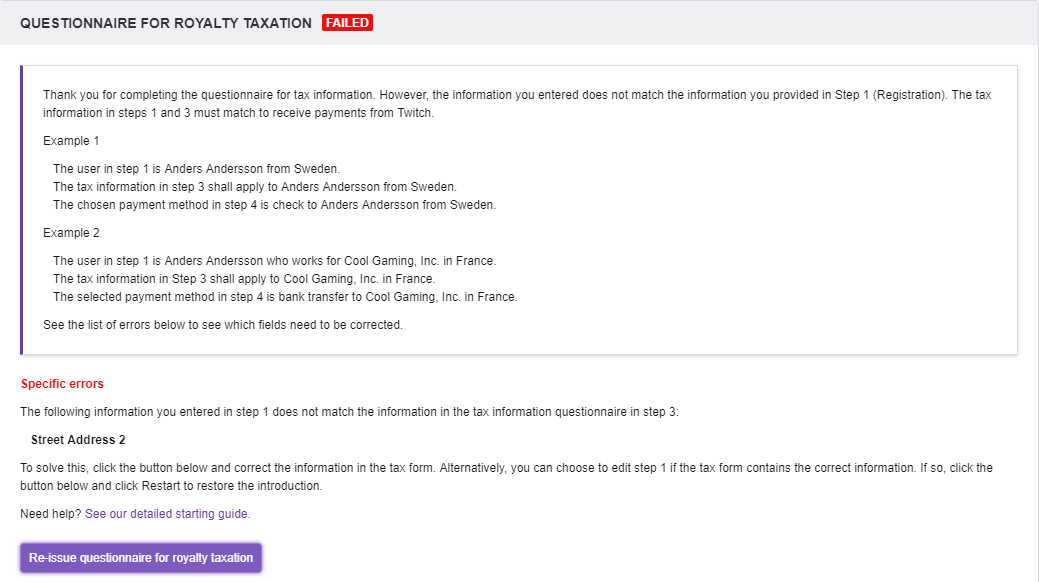 For everyone who is having issues with their Affiliate Onboarding, we would like to look into this further and make sure we get you in touch with the right people. Would you be able to write into our team and provide your Twitch Username and/or your twitch user ID?

Hi There, I am a extension developer trying to complete " Extensions monetization onboarding 4.", however when I click the link, it just jumps to the extension page, there is no " Continue to Onboarding " link for me to complete this step.

No Extensions monetization onboarding link available in the dashboard Extensions

Hi All, I just created a extension today, and I was following all the steps and one of them says I should complete " Extensions monetization onboarding.", however when I click the link, it just jumps to the extension page, there is no " Continue to Onboarding " link for me to complete this step. I wondered if it takes some time to come up, or I am doing something wrong. Thank you.

then @BarryCarlyon help me showing there should be an “Extension developer” section under dashboard, however in my account there is no such thing. I can see my own WIP extension in the invite only section of the extension to install.

Is there any chance I can get some help?

I’m having the same issue as @HoneyComb. I clicked the link in Step 1 of the Monetization Onboarding Procedure for Non-Twitch Partners/Affiliates, which took me to my developer dashboard which does not have any such link for the onboarding process. I have created an extension on the Extensions page (newly created, so it’s incomplete and under the status of “Testing.”)

Please help ASAP - I need this extension to be done by the end of February for the Twitch Extension + AWS Hackathon!

Apparently people are asked to submit issue with Twitch ID on https://twitchdev.zendesk.com/hc/en-us.
So far I have not got any answer…

I suppose there are some issue with our account, trying to enable monetization but we are not affiliate at all, just developers