When querying the “Top Games API” with a given cursor and a first parameter of 100 I get pretty confusing results. This is a dump of 3 calls issued within 2 seconds:

Querying the endpoint without a cursor works just fine (https://api.twitch.tv/helix/games/top?first=100)

Are there any known issues? Although I’m aware that the Helix API is not production ready.

EDIT: All requests have been tested with and without valid OAuth tokens.

5xx codes are “server trip up”

Don’t forget to follow the rate limits! (That would be a 429 error if you exceeded there)

Hi there! Helix dev here. I just double-checked your query and the service does seem to be responsive (works on my machine

). I’m sorry to hear you had this experience. I’ll be investigating if there were any issues in the service and see if any fixes need to be made. Thank you!

Pretty strange… I’m pulling all Twitch games to the database since the Streams API does not offer Game titles any more and I don’t have to query the API with every Stream object.

There are still some 503 error codes.

All API requests include a valid OAuth token. The Rate Limit has been increased to 800 per min. 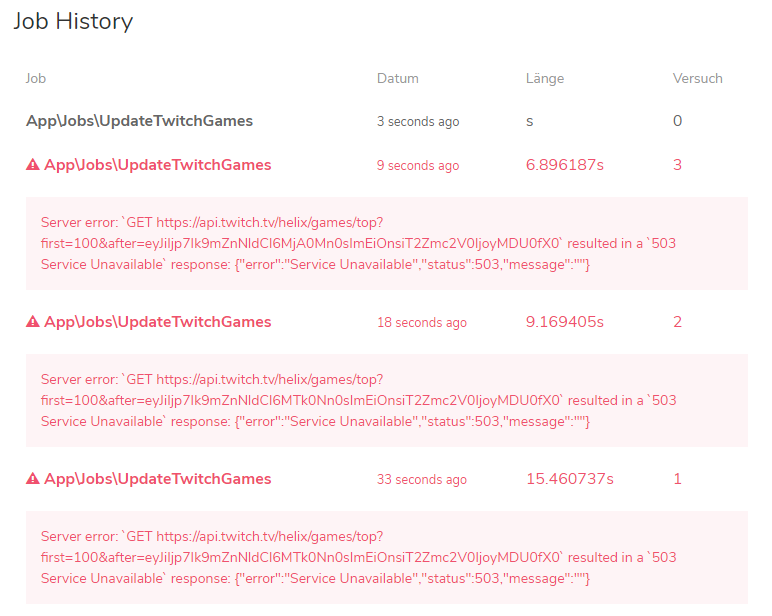 I had a similar issue a while back that was never addressed:

Problem When making multi-paged requests to the new get-top-games endpoint, I get a 503 Service Unavailable after following the cursor. At first, each requests is executed and I get the expected 100 objects per response.

Thanks for bumping this back up, folks. I’m adding it to the list of things we need to investigate. We appreciate your patience!

If it makes you guys feel any better, I days worth of periodic 503 errors on different endpoints. So it’s not just you. I’ve talked with @geardrops about it, so hopefully things can get resolved quickly.

We’ve investigated the issue and pushed a fix out, and now you should be getting 200 and empty data instead of 503s in this case!

Just did a quick test and I’m no longer getting 503s.

Late to the party bc of irl stuff, but I haven’t seen any 503s in my logs for a while… thx @geardrops

Glad to hear it!