Taking three channels at random, none of them return a pagination cursor field when requesting videos despite all three having more than 100 videos each.
For instance, requesting following:
https://api.twitch.tv/helix/users/follows?from_id=26490481
{"total":185,"data":[...],"pagination":{"cursor":"eyJiIjpudWxsLCJhIjp7IkN1cnNvciI6IjE1MTkzMjY1Njc2MDAyNzQwMDAifX0"}}

For obvious reasons the data contents were cut, they were correct and expected responses for the first page of information, however video requests no longer return any next page information. I believe that it did at one point as I’ve already done work to anticipate it to make followup requests, but I only recently noticed the lack of it within the last week (max month). By using the “first” parameter, the returned amount of videos can be boosted to 100, so the videos are clearly there, but letting it default to 20 still results in no pagination value, despite as previously stated that all tested channels have 100+ videos. This is further emphasized on channels that I’ve testing that have 1000+ videos.

Api cursor not working as intended?
No Cursor when requesting streams via certain game
Sut3kh October 12, 2018, 7:43am #2

This suddenly started a few days ago and has completely broken one of the key parts of my app, please fix or let as know of any workaround asap!

I kind of hoped it would have been picked up by your tests or something by now or I would have mentioned it earlier, guess you don’t have any automated tests or QA

Glad I don’t have a business relying on your APIs…

+1, we’re also affected by this issue.

In our case, Get Videos endpoint of New Twitch API also returns empty pagination data. This is true for both getting videos by user_id and by game_id.

Looks like the issue have started on October 9th.

+1
It’s been quite a few days now. Has there been communication about this? I’m using the New Twitch API. Getting other paginated results, like user follows, is working. The videos endpoint is not. No matter what parameters I use, the pagination result is empty. I’d really like to be able to get more video results than the first 100.

This issue is also impacting my product negatively. Are there any updates from Twitch on the timing in which this is being looked into? This is a high priority for us who are relying on this video endpoint for our products. Thank you!

In regard to topics being closed based on this topic, of the two that have been linked to this one, zero of them are related.
Firstly, this topic strictly deals with the observation of the “Helix” version and “videos”, hence the deliberate showcase of “Helix” and “videos”.
Second, Daniel_Baychev’s “Api cursor not working as intended?” deals with “Kraken” given their URL, which does in fact return a proper next page, and ALSO I specifically highlight “follows” requests working as intended in Helix, of which they still do. Their article is related to not using the API correctly based on the URL provided not having the field they use as an option, which isn’t helped by the fact that the documentation itself uses a channel ID which raises errors and instead only works using a channel’s login name when tested.
Finally, manuva’s “No Cursor when requesting streams via certain game” ALSO deals with “Kraken” and not Helix, again signaled by their provided URL. That issue is likely rooted in incorrectly parsing, as again I have found it to return a next page field that works.

I poked this “upstairs”

It should be fixed now! 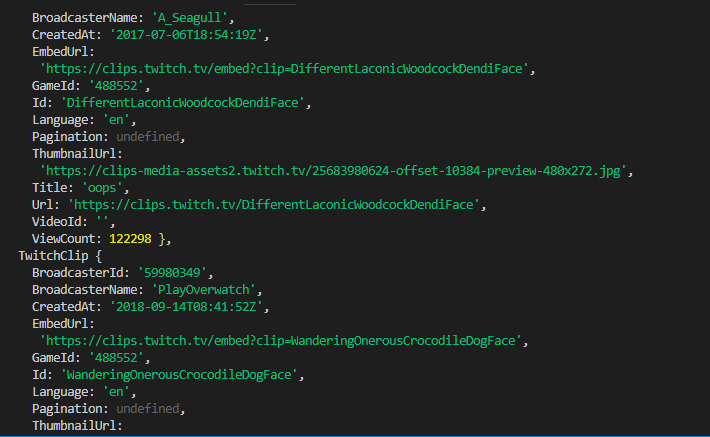