How to proceed to make a panel?

I jus want to make an panel to send commands to my chatbot, but i cannot even run the Hello world

And finaly i run the Developer Rig

the last command do nothing

Now i dont know how to proceed

You have not generated any SSL certificates for the hello world project. See the notes at the very bottom of the README page (hint: call npm run cert)

this command is not working, i will try to reinstall NPM 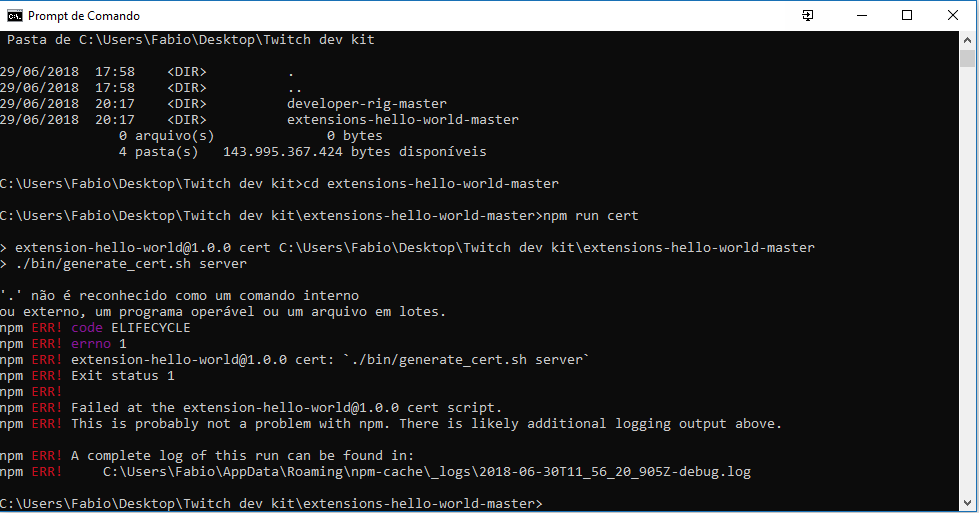 if you’re having trouble with Twitch’s hello world project you can try mine: https://github.com/xzion/twitch-extension-demo

i will try your demo

i installed your demo and its running, but i cant find the numerical id of my channel.
Where i can find it?
I am new on twitch development sorry

Get Started with the Twitch API

Time for you to read some API documentation. The users route will give you the ID.

Sorry, i am trying everything, but nothing works on windows,

i cant even execute the first command of the documentation:
curl -H ‘Client-ID: onf35jrvd7mucf1pqzm633kb1dxp5f’
-X GET ‘https://api.twitch.tv/helix/streams?game_id=33214’

Thanks for the help, but i guess i am wasting my and yours time.
I have done many softwares as 3D third person shooter using Unity3d, made support helpers using IBM Watson, made web pages using java/ajax/oracle for many industries here on Brazil only following the documentation, tutorials and videos. But i cant even develop a simple panel on twitch.

I will wait until twitch have more material to help new developers from zero to hero.

The curl command should work on Windows too if you combine it all on one line. \ on linux and mac commandlines indicates “this command continues on the next line”, but Windows doesn’t seem to recognize it as such.

Instead of using command line, you usually make HTTP calls in the programming language of your choice. Curl commands are just a clean way to represent those example calls.

Remade every step, and the result is backend runing but frontend hosted by developer rig has error 404 on browser 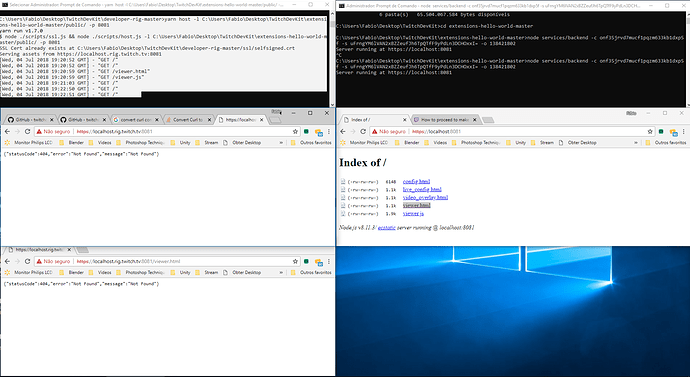 From those pictures, you don’t seem to actually be running the dev-rig, you’re just running the backend and frontend of the extension. Have you set all the required environment variables and run yarn start from the rig dir? 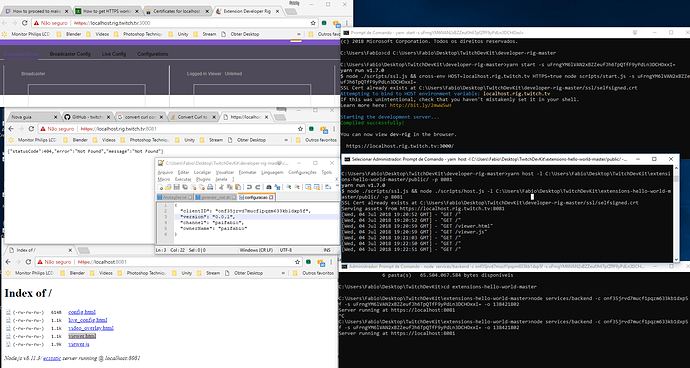 That is all that is running

even the system variables are set

You may want to revoke that secret key, you’re not meant to share them publicly and it’s a security risk. Also, as you’re using a different port to that shown in the examples for the extension assets, have you correctly set your extension to the correct URI, as it may be trying to look for assets on 8080, rather than the 8081 that you’re using.

Probably wise to put them on separate ports.

What did you set your hosting URL to at Extension Dashboard -> Manage Extension -> Versions -> 0.0.1 Manage -> Asset Hosting

Did you put https://localhost:8081 here as you put the later then you are trying to display your EBS/Backend as the extension front end in the frame 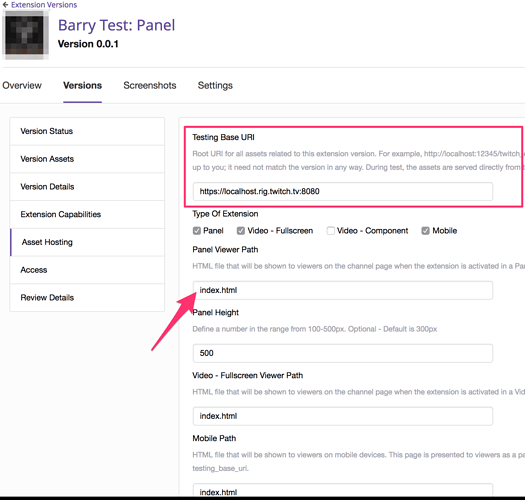 Make sure to have also set Panel Viewer Path correctly, which based on your screenshots should be viewer.html