I’ve never had an issue until a few days ago (or at least I noticed it then) - And I’m not the only one.
kraken/users/{ID}/follows/channels accepts limit, offest, direction and sortby.
It’s always worked great, but recently it’s ignoring offset.

My site: The South African Twitch Streamer Directory https://tcno.co/zatw shows each channel repeated 5 times.
Why? The @ZaCollective [273125921] account follows 520+ accounts. It lists the first 100, sets the offset to 100,200, etc, but it’s ignored so it just repeats 5 times.
I was going to make 6 accounts so I can just get my site working again… But after finding a site that lists what channels I’m following, I came across: https://twitchinsights.net/followlist which has the exact same issue. Each channel is shown 5 times, as the offset parameter is ignored. 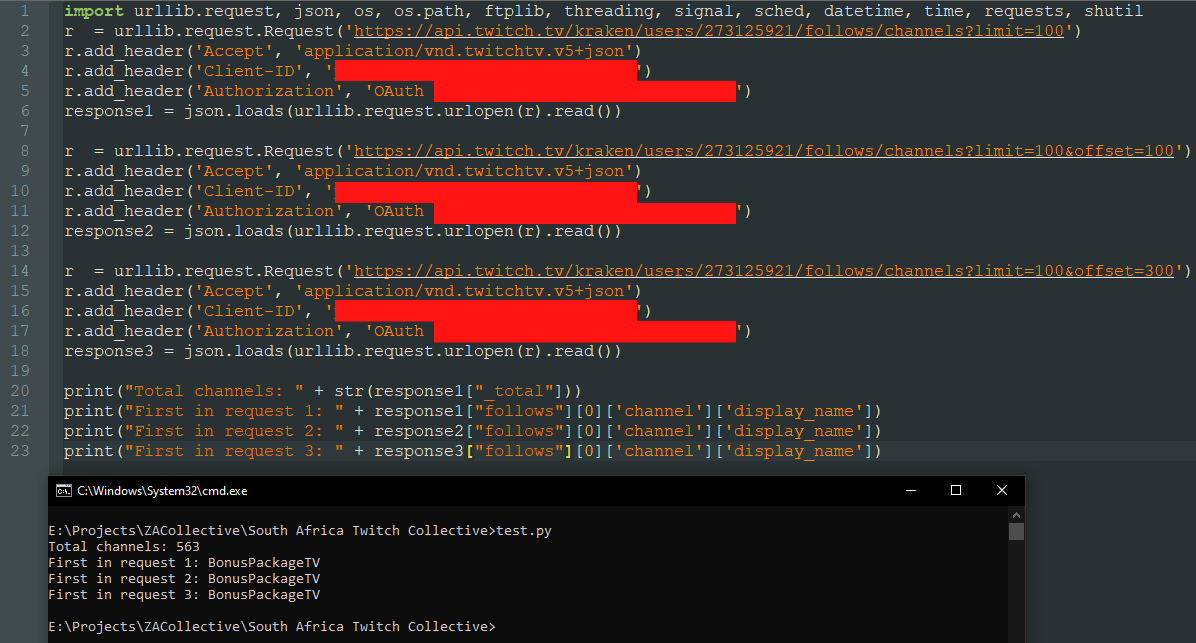 Hi, I’m having an issue with the legacy API endpoint ‘get user follows’ found here The parameter ‘offset’ as stated in the documentation is currently being ignored. This has been the case since roughly 2 weeks, beforehand this did used to work. Using the new API is currently not an option atm. Is this maybe a known bug? or are no further fixes to be found due to its deprecation? Kind regards, James

**Brief description** When using: https://dev.twitch.tv/docs/v5/reference/us…ers#get-user-follows The offset value is being ignored, making it impossible to load all data (above 100). Example call: https://api.twitch.tv/kraken/users/43091333/follows/channels?limit=100&offset=0 Returns first 100 items, with a _total of 382. If you then increment the offset: https://api.twitch.tv/kraken/users/43091333/follows/channels?limit=100&offset=100 The same data set is returned. I started getting reports about this about two days ago, and it appears to only impact some users. In my case, I was not using Oauth for authentication, but rather passing in user id via URL and setting the Accept header : application/vnd.twitchtv.v5+json. There are a number of other reports on the Twitch Developer discord, included below: > CommanderRootToday at 7:23 AM > https://discord.com/channels/504015559252377601/523675960797691915/761131559528693761 I just checked the following API (https://api.twitch.tv/kraken/users/{userID}/follows/channels?limit=100&direction=desc&sortby=created_at&offset=0) and the offset seems to be completly ignored on that one. You get the first 100 and if there are more you're out of luck getting them. You can try it with this for example this to see the effect https://twitch-tools.rootonline.de/followinglist_viewer.php > DistToday at 7:25 AM > It's not just an offset issue. > For example https://api.twitch.tv/kraken/users/19264788/follows/channels, which is Nightbot, and follows 93 users, only returns a single follow regardless of offset (or lack thereof). > Using Helix on the other hand returns all 93 follows without issue. > > Offset value is being ignored for some users (I know there is now a limit to 900, but its ignore for all values (again, just for some users, and just since last night). > > https://api.twitch.tv/kraken/users/43091333/follows/channels?limit=100&offset=200 **How to reproduce** **Expected behavior** Offset value increments data being returned **Screenshots** **Additional context or questions**

however in the meantime the other sorts beyond created_at (the default) will work with the offset normally.

Thanks for the fast response