https://dev.twitch.tv/docs/extensions#testing-your-extension I was reading this link here which shows how I can test my extension on twitch but it doesn’t tell me how I can upload my code or test it locally on my laptop/desktop without going to twitch. 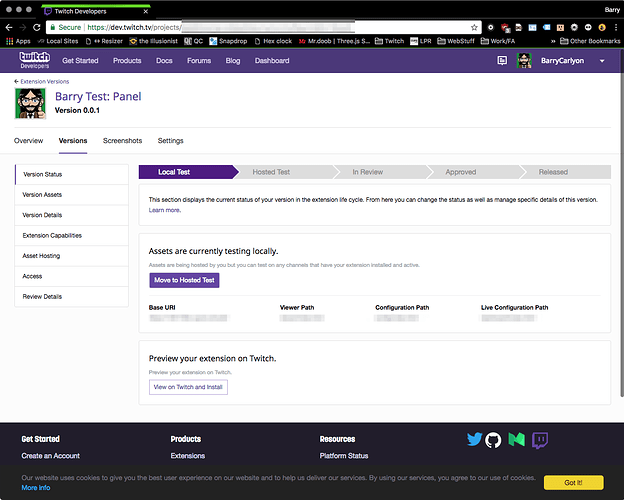 You need a HTTP server running off your machine and then edit an extension version to point to that.

Some of use NGROK to tunnel thru and handle SSL Terminate. But a http://localhost/ should work as the base URI just needs some faff to deal with SSL fun times.

I did also look at the boilerplate code on GitHub and I do see code for a server running off the backend. Would I just fire up the server using the backend code and serve the static front end files? I’m somewhat new to JS. Thanks for helping me!

Would I just fire up the server using the backend code and serve the static front end files?

config.html is for a proper config page for the extension
live_config (optional) is for a panel on the dashboard
viewer is for the viewer yes

thanks a lot man!