Max length of title and other limitations

I have the following queries with respect to title . Kindly help

This forum is for third party developer support for the API. Not sure if this is related to the website or the API.

Having said that, if you’re talking about the stream title, there is a character counter underneath the field in the dashboard. You can also use extended character sets. 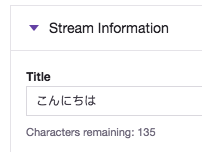 There are no language limitations beyond some words being blocked due to their meaning and common abuse.