so I was not able to get into dev day but I heard there were some news regarding monetization.

haven’t found any slides for this yet, anyone who was there care to elaborate?

we would be really excited about this to use in our extension, I guess it will be using twitch bits?

I am curious about this too. Did Twitch announce anything at Twitchcon regarding extension monetization?

I’m not sure if there is a full write up somewhere of what was announced, but there is the dev Keynote vod that you can watch https://www.twitch.tv/videos/183456518 where at about 30 min in Ethan Evans (VP commerce & developers) talks about some of the monetization plans.

He doesn’t go into specifics of implementation but it does give an idea of what is coming, and the monetization split options (one photo I saw showed dev/streamer/Twitch split options being 70/5/25, or 25/50/25)

Limited preview mid November and then everyone else Q1 2018 iirc of the top of my head.

Initially pay with Real Money via Amazon Payments, later™ bits will be supported for payments. 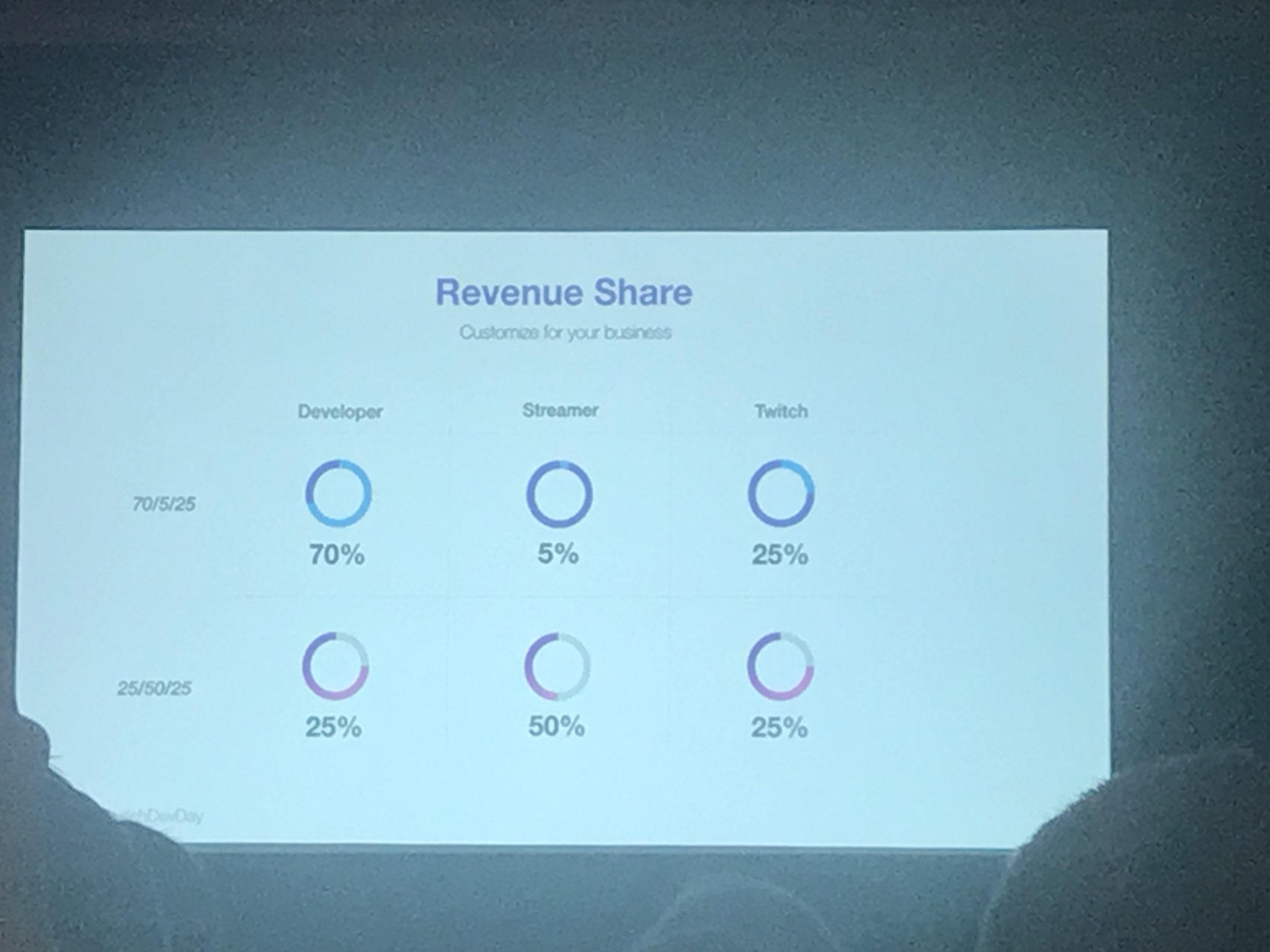 The revenue splits photo I took ^^

I was also surprised that it seems the user has to leave twitch in order to buy the item. But I may of misunderstood how this works.

To pay money it pops a popup window to handle the purchase, as it links to amazon payments, it will likely work the same way as game purchasing does. (and bit purchase)

@BarryCarlyon, you are correct in that the initial offering is in line with how game purchases work. Payment for a purchase is handled through Amazon, but fulfilment is on Twitch.

Bits in Extensions is on the roadmap.

When monetization fully rolls out, will there be a way for 3rd party apps to track in-extension purchases?

For example, if I’m doing analytics for a streamer, part of which currently includes data on tips and bits, and that streamer wanted to start using extension ‘abc’ that had in-extension monetization, if I want to record that data and includes it in the reports will I be able to do that through Twitch with an appropriate OAuth token/scope (ie, will there be a pubsub event when a transaction happens)? Or will the only way obtain that data, if I’m not the extension dev myself, be by having the streamer export the data (if that’s an option) or hoping the extension dev will create an API on their end to support it?

part of which currently includes data on tips and bits, and that streamer wanted to start using extension ‘abc’ that had in-extension monetization

Right now, I bet it’s gonna be similar to games purchase/commerce pubsub, which means you won’t even know as not the streamer and not the extension developer, you won’t know what the split is either…

So you’ll be stuck there I anticpate

Thanks, hopefully we’ll know for sure in Q1 2018 when it rolls out to everyone. For the time being none of the streamers I work with plan to push in-extension purchases, or even use them at all, so for the moment this isn’t an issue, but it would be helpful in the future if there was an easy way to retrieve this data, or listen to the events, with an appropriate scope.

I’ve have been mulling how to respond here.

When monetization fully rolls out, will there be a way for 3rd party apps to track in-extension purchases?

Fully is very hard to qualify. There will be multiple paths to monetise Extensions, which are likely to continue to roll out and be enhanced over time. For the initial offering of digital goods purchases in Extensions, developers will be able to retrieve entitlement information in order to be able to fulfil purchases. Per Extension attributable revenue reporting will also be made available to Broadcasters and Developers. Please bear in mind that bits in Extensions is coming too.

I do not think that this is really what you are asking for though! At this time, I have not heard of any conversations around allowing parties other than developers and broadcasters (and Twitch) to track Extension monetisation. This does not mean that it will not happen mind you!

Hopefully this helps, at least a little.

Thanks for the reply. I can understand it might be a niche use case for there needing to be access to purchase information by someone other than the broadcaster or extension dev. I’m working with the broadcasters themselves, so worst case scenario I would simply need the broadcaster copy the per extension revenue reporting that you mentioned (hopefully they’ll just be able to export that data and not just have to copy/paste) and send it to me to add into my database so that it can be reported back to the broadcasters alongside their other earnings and stream/channel stats.