Move a stream chat to a group server

I’m relatively new to Twitch chat, both from a user and a developer point of view, and I’m trying to understand whispers and how they work with the different types of servers (ie group, event, normal). Everything I’ve read says that I won’t be able to send/receive whispers unless I’m on a group chat server. But my stream’s default chat channel isn’t on a group server, as far as I can tell. Can I move it to one?

Also, I get that event servers are for high-traffic chat rooms, but what is the purpose of group servers vs normal servers? 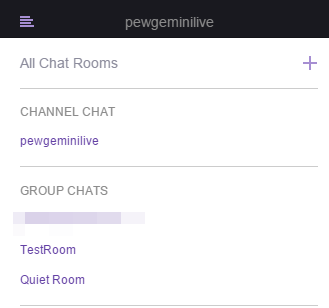 So it is just that whispers are not accessible to third-party apps from non-group servers?

What types of things are group chat rooms generally used for?

group chats were originally for creating separate groups to chat in. Now the same servers host the whisper functionality. Get one from http://tmi.twitch.tv/servers?cluster=group

There is nothing channel specific about them, since whispers are peer-to-peer communication.

So @livewhiletrue, you are saying if I connect to a chat server via IRC, make the correct CAP REQ, then I should hear any whispers sent to my user? I will go try that now…

Yes, that did work.

Whispers weren’t implemented by the time I developed bots so I am not sure if you actually need to be connected to a group server to recieve whispers, but I do know that you need it to be able to send them. Better safe than sorry, I guess.

Interesting, so if you create a group chat room, how would you connect via IRC? or can you?

BTW you do need to be connected to the group chat to receive whispers.

You don’t actually have to create a group chat room in order to use whispers. You just need to: