Twitch raids allow a broadcaster to send viewers to another channel at the conclusion of their stream. Raiding can be a great way to make connections and network with other broadcasters by sharing audiences and growing their communities together.

Historically, starting a raid was possible through a quick action on the creator dashboard or the /raid chat command. In order for third-party developers to initiate a raid, a chatbot account with moderator access was necessary to use the chat command. Today we are extending this functionality to the Twitch API in an open beta so that developers can take advantage of this Twitch feature within their application logic.

How do I get started?

The following Twitch API endpoints have been added to manage raids with a broadcaster’s user oauth token.

In addition to these endpoints, we have introduced a new scope required for both; channel:manage:raids.

Please feel free to provide comments and questions in the thread below.
Happy raiding!

After calling “start a raid,” it would be nice if we could call the endpoint again with an added request parameter that executes the raid immediately (without waiting for the full 90 seconds to expire or the broadcaster to press “Raid Now”), given the initial 10 second cooldown has expired

After calling “start a raid,” it would be nice if we could call the endpoint again with an added request parameter that executes the raid immediately

is there a hidden uservoice for the endpoint being able to work with a channel editor’s user access token (instead of just broadcaster)?

No, for all my use cases I have the broadcasters token (since I also have a token for subscribers and other scopes). So I don’t need a channel editors token for the operations I do. So you’d need to create a uservoice for that

Sorry if I missed something, but is there a reason the *_broadcaster_id parameters are integers?
All the other endpoints, and the eventsub data use/return them as strings

Since when it is added to a URL it’s a string anyway.

I was hoping that might be the case, but seemed odd that the response codes also mention them being integers

Ah, I missed that there was one already and created a new one I guess, which one is the one you’re referencing to here?

which one is the one you’re referencing to here?

it’s in a private uservoice category 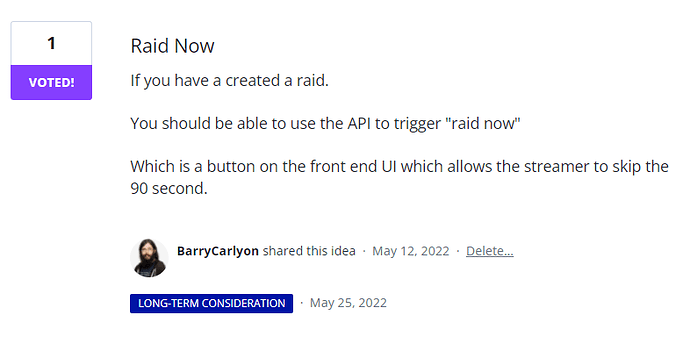 A clarification and follow up since there has been chatter regarding private/public UserVoice suggestions. During a closed beta, we host a private UserVoice forum for participants. When functionality moved from closed beta to open beta, we should move any open items to the public forums and archive any suggestions that were implemented.

I’ve completed this for the Raids API this morning, so the two open items that should now be viewable/voteable for all are:

If you have a created a raid. You should be able to use the API to trigger "raid now" Which is a button on the front end UI which allows the streamer to skip the 90 second.

Provide an endpoint for recent raids

Or as a minimum "Raids this stream". But then you need a sensible reset point. So last x days works. Similar to other "time" based endpoints.

One more UserVoice (& the first time I’ve advocated for a more restricted rate limit on a helix endpoint): Previously, raidGo was rate limited to 3/30 (& enforced after hate raiders were abusing lack of limiting in gql). While I’m fine with startRaid/cancelRaid having the elevated 10/10 limit, I think carrying this over to raidGo is ripe for abuse: Revert Raid Rate Limit to 3 per 30 mins – Twitch UserVoice