There seems to have been a few changes to the API and chatsystem for mods and they are honestly nothing more than an annoyance (for me).

I don’t see a reason for any of the changes made in the past 24 hours, and the only purpose they seeem to serve so far is to be rather annoying.
I’d like to see everything reversed, unless they made these changes on purpose.
Anyway, just my 2 cents, curious to see where twitch takes these changes.

Neither 2 or 3 are occuring in vanilla chat (no bttv no anything), and I don’t see any “wrong” modding of Nightbot in the channel(s) I am looking at (nightbot is not even present)

SideNote: the thing that sends +o/-o is a relativty useless TMI IRC interface IRCv3 capability since it’s the “join/part” capability, it’s useless when you have 1000+ members in chat anyway. 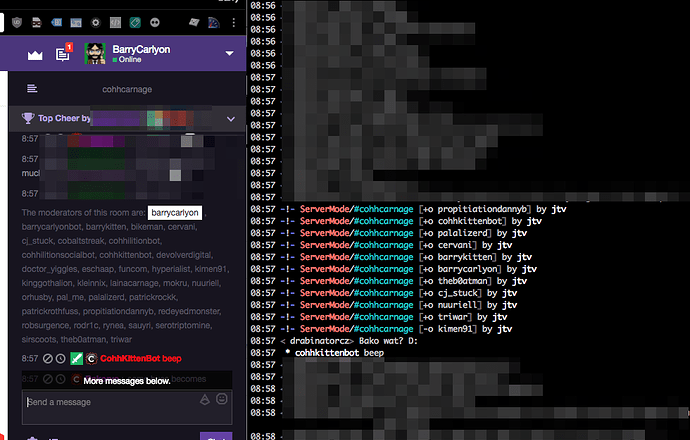 Image showing replication of 1, but not 2/3

Actually, all 3 are occuring outside of chatty and you can test that by either going on vanilla twitch or by building your own bot and having it request the current moderator list and such.
To check point 1 and 2, just look at tmi.twitch.tv/group/user/drdoomtastic/chatters for example.
To check point 3 you can just go on vanilla twitch and type /mods in my channel, it should show you multiple empty names.
All 3 are reproducable regardless of current program or extension.

Not denying that it’s happening to you, just saying it’s not to me… 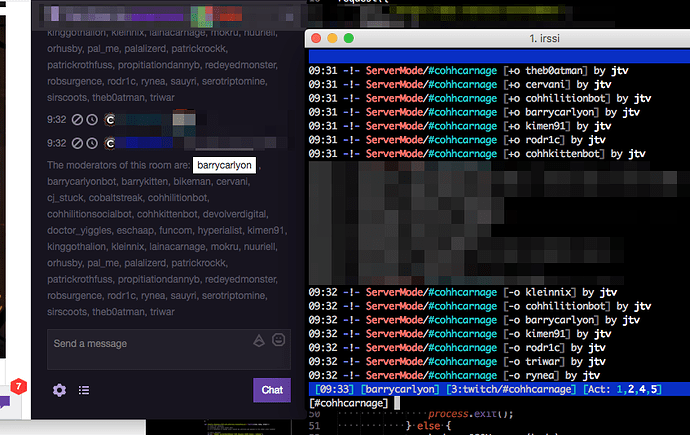 Sidenot: If I recall correctly, there was a bug a while back where if a users account was removed from Twitch, it was leaving empty names in /mod lists.

I’m getting empty names in your channel on first load of the page, before any +/-o’s occur

Been sat in your channel a while. I don’t see a replication of 2. 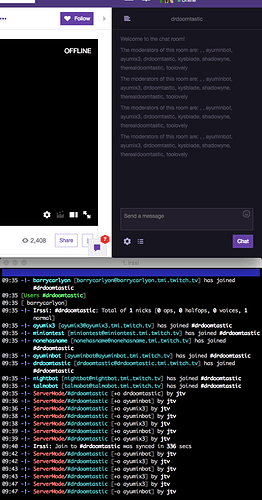 Yes, nightbot needs to be present in the channel for him to show up as a mod in the tmi.twitch.tv/group/user/drdoomtastic/chatters list. However, he himself is not a mod on the /mod list.
This image shows him receiving mod status, while your image shows that he is in fact, not a moderator. 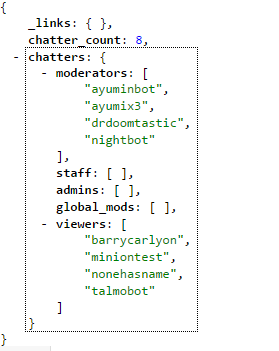 I’m not getting MOD-ing of nightbot over IRC, also I will not install Chatty on my work computer to test chatty 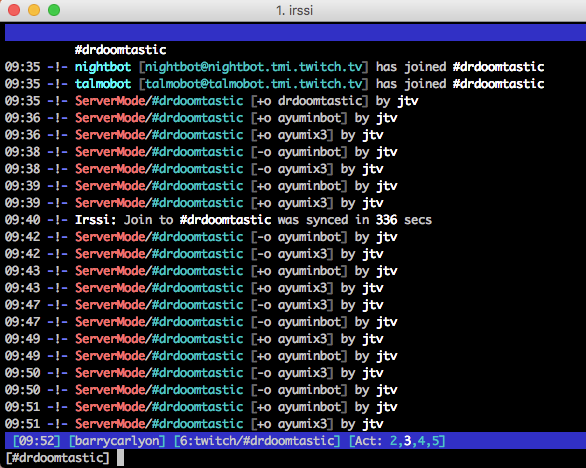 That’s ok, I have included a picture of nightbot being on the mod list.
The api is where chatty is getting its (apparently incorrect) information.
Again, nightbot getting modded will not show up on IRC, it onlyshows up on the API.

Maybe twitch decided that making all globally recognized bots into mods automatically was a good idea, seeing as they are already able to change title and such without the channel owner giving them the rights, which is another point of interest to me, but not now.

seeing as they are already able to change title and such without the channel owner giving them the rights, which is another point of interest to me, but not now.

Thats not possible… The bot would have to be an editor of the channel, or have the channel_edit scope requested and accepted.

Go to nightbot’s channel, make it enter your channel and type !title anything, or !game anything. It’s able to change both your title and game without any prior permissions.
They are also included on the moderator list in the API, but other mods are still able to ban them, as long as they aren’t explicitly modded.

You gave nightbot permissions at some point

I do remember logging on long ago, I did not expect that to give it the necessary moderating powers on twitch though.
Thank you for that.

I wonder if the api will show nightbot getting modded or not in that case.

The constant +o/-o is annoying, but only a problem for chat clients respecting the MODE messages, which Twitch-specific IRC clients really shouldn’t do IMHO. They’re batched and don’t separate channel mods from those with global moderation privileges (global mods, admins, staff) who aren’t even allowed to moderate the particular chat in most cases.

The viewer list is not properly showing mod status on all requests at the moment as far as my quick testing can tell; it’s listing mods under normal viewers instead in a lot of cases too.

/mods showing empty usernames is an old issue dating back over a year at least.

Also keep in mind none of this behavior is actually documented in the first place. Changes can therefore happen without documentation as well. (MODE is documented as a user gaining or losing moderation privileges in a channel; still as accurate as it used to be, just spams it more often.)

Is this still an issue? We cleaned up some issues that we think might of caused this (re: viewerlist, and user issues)

#1 and #2 were fixed a day or two after I posted this thread.
#3 still seems to show, however seeing as the others have said this is an older issue I guess that’ll be resolved again sometime.