Hey guys,
my extension (Angular) runs fine on local. When I upload it to Twitch, I have 2 really strange path problems:

but then internally my js scripts can not be loaded.
They are referenced like this in viewer.html:

which returns:
404 Not Found

already found the posts refering to this problem, but could not fix it yet.

Internally I reference my assets like this:
<img src="…/assets/img/…>

Hope you can help me. Ty
Tobi

Anyone? Please, could not fix it yet.

I’m seeing the same issue, with Vue and/or Preact. The files need a publicPath set but I don’t have a way of knowing where the cdn is going to put them beforehand.

Still hoping for some insight on this, I’m dead in the water until this is fixed.

Did you try this solution

[SOLVED] Vue.js is not working on Hosted Test Extensions

I have the exact same issue (Angular) local is great. Using ng build --prod, but with optimization set to false to skip minification. That goes in a “public/” folder which contains an index.html, many bundles js files, and one css file, as well as an assets folder. I zip everything while inside the folder…

However the files relatively referenced in index.html access an incomplete path:
"https://48a6l522li5kdnyiwwfcleeu86aehj.ext-twitch.tv/polyfills-es2015.1f07717b803649b0cda9.js"

solves all my problems… until I upload my zip and the md5 changes again. Which is good but bad for me getting this to work. I want to know if anyone figured out a solution here. Putting * anywhere, like in the forum post above did not get me anywhere.

I was thinking of dynamically changing the base href but I can’t have inline scripts, and I can’t access the scripts I create lol…

Also this feels like it should not be an issue unless 1) Angular/webpack is not allowed or 2) My setup of is off in some not obvious way, that I’m hoping some with fresh eyes can help me with!

However the files relatively referenced in index.html access an incomplete path:
"https://48a6l522li5kdnyiwwfcleeu86aehj.ext-twitch.tv/polyfills-es2015.1f07717b803649b0cda9.js"

This indicates they are not relative links.

Thanks for the quick reply!

I really hope that is the case. Below I have examples of the scripts at the bottom of index.html and the css import that I have tried:

As I mentioned before I also tried, which shouldn’t work due to the incorrect hash but it did get rid of the error. Maybe it takes some time to remove the old version/hash. But I digress, I’ll attach index.html below if that helps.

I changed <base href="/" /> to <base href="" /> because you are correct that absolute pathing had to be happening somewhere and that was the only likely culprit!

Now I’ve got all these other path issue but those feel more reasonable… for some reason lol.

Other errors if you are curious: 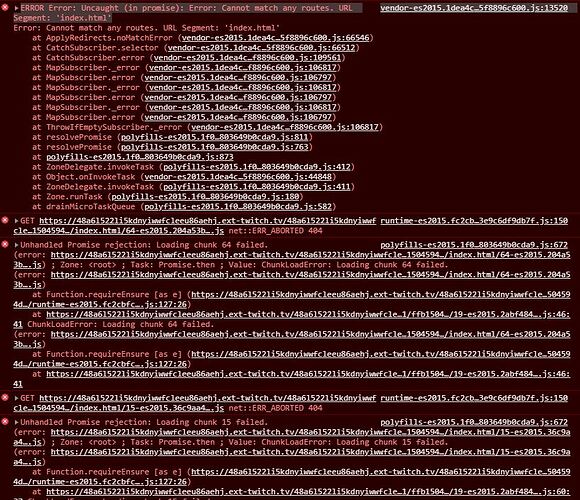 Got it all working!

For future reference I change my base href to:

That resolved all (above) but one error, which had to do with the angular router.

Changed my pathMatch, in my router.module files that contained children, from ‘full’ to ‘prefix’.