I’m starting with building up extension for twitch and I’ve started with the hello world example.

I’ve followed every step of the process but I have an issue. I’ve uploaded the hello world project on the rig and in the “Extension Views” I have this : 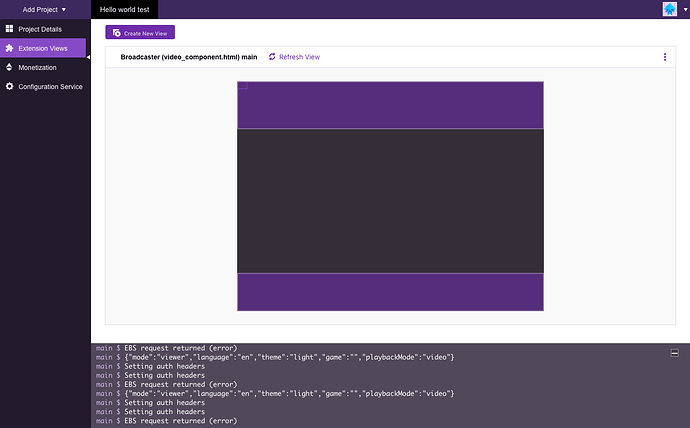 “EBS request returned (error)” Do you guys know how to resolve this problem ?

By the way, when I activate my back-end service locally I have the text “spawn node ENOENT” which appears next to the activate button and idk if this is normal.

Thanks a lot for you time guys !

No, that is not normal. It means either you don’t have node installed or it isn’t in your path. Node is a dependency of the back end of the Hello World example extension.

Isn’t Node installed as part of installing the Developer Rig? I’m piggybacking on this thread because I’m running into the same issue.

No longer now that the Developer Rig is a desktop application.

Ok, so Node is installed as apart of the Rig. Then I’m not sure why I’ve run into this issue as apart of 0.9.9

Ok, thank you for the clarification. Still navigating the docs and I missed that.