I’m asking for a little button to report, in the menu that pops up when you click a name. 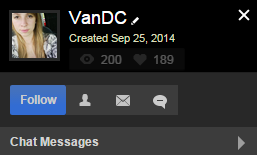 I hate that I have to enter a person’s profile to report them. I hope it’s something that’s usefull, and I’m not the only one who’s asking for this.

You should direct this request to the BTTV Issue Tracker here: https://github.com/night/BetterTTV/issues

Oh, I’m sorry for wasting time then, I was pretty sure Twitch had their own of that user card

I’ll forward it to the BTTV.

But a “Quick report” button is more likely to be abused.
I suppose it could be make Mod only but shrug

You could suggest it to the UserVoice though: General: Top (616 ideas) – Twitch UserVoice