With recent outcries against the innocuous “lurk bots” being seen in the chatter list I had the thought that it may be time to rework the list functionality a bit and provide some options to the broadcaster of what is shown in that list.

This would help the broadcaster (and others looking at the list) to see what they want to see, without unnecessary information that may not be helpful overall.

I suggest the following changes:

Types would only apply to chatters that aren’t Twitch Staff or a Channel Mod. Active Only will only show chatters that have chatted within the last 15 minutes.

Mock-up of the options as they might appear in channel settings: 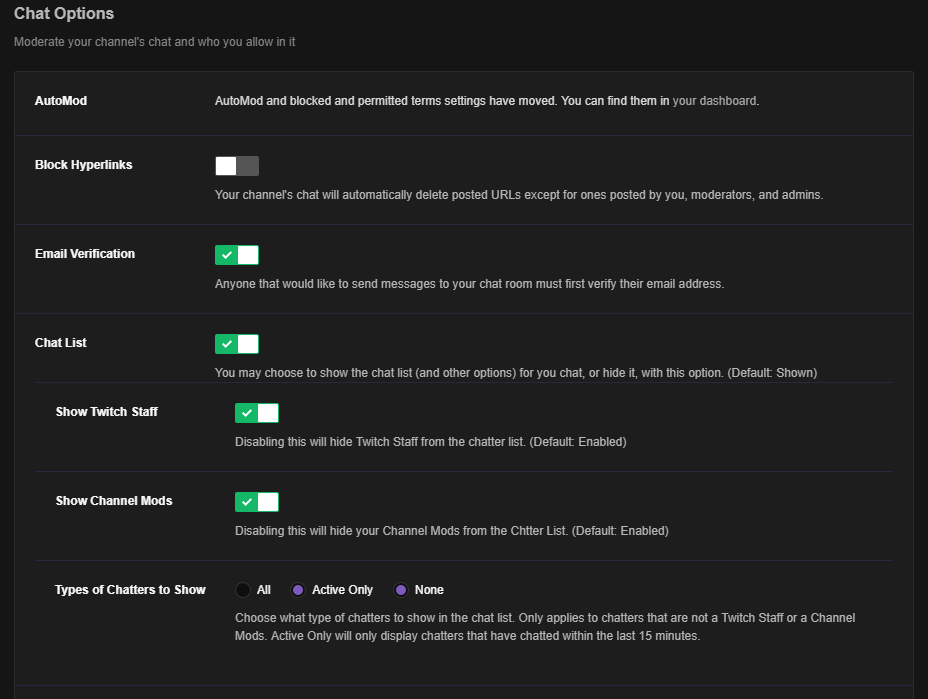 Some of what you suggest, such as showing Twitch staff, mods, active chatters etc… could already be implemented in client-side scripts/browser extensions.

My view is that the chatters list should always be as complete as possible (and I hope the new endpoint includes additional data that the current undocumented one lacks), and any filtering should be client side. While I don’t particularly like “lurk bots” especially when Twitch supports the “follow for follow” nonsense which inflates both chatter and follower numbers, I still think that those bots should be included in the chatters list and that they shouldn’t be filtered server-side, although filtering them client-side by default could help prevent those profiting from the follow for follow stuff.

Some things you’ve suggested, like email verification, could add overhead too so may want to be avoided. Really though we just have to wait and see for Twitch for release info on the chatters endpoint they’re working on and go from there.

E-mail verification is already a thing, the image there is a mock-up for just the chat list options ( https://www.twitch.tv/settings/channel and scroll down) , here is the actual settings screen for that section: https://srink.net/2PXgU1n

Regarding the other points:

I meant email verification within the chatter list. Getting a full list is simple, the more filtering you add, especially if it requires hitting other parts of the API to do so, will have some overhead.

I’d be interested in the numbers of how many broadcasters are ‘concerned’ about this issue. From my experience, the vast majority simply don’t care, a handful notice it but don’t want to do anything to change it, and only a tiny minority I’ve seen speak out against bots and lurkers showing up in the chatters list.

You can’t compare filtering chat with filtering the chatters list. It’s 2 different systems, and again, there will be overheard and only Twitch will have the data to know what the cost will be. Letting it be client-side gives the option to the viewer and the way they want to experience chat, rather than a specific way of viewing chatters (those that actually do look at the chatters list) forced onto them.

Twitch shouldn’t be defining what an “active” chatter is, and there isn’t a need for adding yet another flag for it. For things like giveaways it should be in the hands of the giveaway app, and the broadcaster, to determine what is classed as “active” to work out eligibility for a giveaway. By excluding users from the chatters list you’d also be removing them from all points systems that the channel may be using, and skewing channel analytics. There are many people who watch on mobile, console, or multi-stream sites, that have access to chat but simply don’t because it may not be convenient, that doesn’t mean they should be excluded.

Honestly, this sounds more like a suggestion for https://twitch.uservoice.com not an feature suggestion for 3rd party devs, as what you’re suggesting could actually hamper 3rd party apps that rely on the chatters list being a ‘clean’, unfiltered list of users connected to chat. Maybe if you post it on the suggestions site we’ll be able to get an idea of how much/little demand there is for such a feature.