We’re aware of this being an issue. I’d recommend using follower only with a slightly longer duration. This is more of a moderation issue though.

Do /ban commands count toward the chat rate limit?
If I set up my bot to ban those other bots, I guess my bot would get banned quite fast?

You could just create a custom bot that reads chat and if the same message (cutting out numbers) is sent enough times, it just blacklists the root message (again taking out the numbers). Every time the root message is sent in chat, it either bans the user or just times them out.

I know this is a very messy approach, but it’s the best way for mods to address the issue at the moment.

Edit: Forgive me for only glancing at the original post at first. I see you have tried it.

BUT: r9kbeta should work… see here: 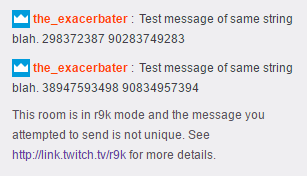 I’m not sure if TMI ignores r9k, haven’t tested it yet. Also, do you have any other logs that might show if they are putting some extra invisible characters in the string?

R9KBeta
This command disallows users from posting non-unique messages to the channel. It will check for a minimum of 9 characters that are not symbol unicode characters and then purges and repetitive chat lines beyond that. R9K is a unique way of moderating essentially allowing you to stop generic copy-pasted messages intended as spam among over generally annoying content. To find out more about what R9K is, refer to this blog post.
Usage: /r9kbeta

R9KBetaOff
This command will disable R9K mode if it was previously enabled on the channel.
Usage: /r9kbetaoff

Yes! All messages sent to the IRC server are counted in the rate-limit, including:
.ban, .timeout, .unban, .mod, .unmod, etc…

If you send more than 20 commands or messages to the server within 30 seconds, you will be locked out for 30 minutes.

If you send commands/messages only to channels in which you have Moderator or Operator status, the limit is 100 messages per 30 seconds.

Maybe making those commands support a comma separated list of usernames could be considered.
Banning me for banning bots makes no sense. Multiple connections would be an option but I’m sure many would rather avoid that

making those commands support a comma separated list of usernames

This wouldn’t be a good option in your case or anyone’s to be honest.
If you want to automate a ban using a bot, the ban should be instant.

Banning more than one user at the same time would require you to already have a list of users you want to ban and to gather a list in real time would mean that the message of each user would stay in chat for a longer period of time since you’re gathering a list of users to ban up to a limit of your choosing.

When detecting a flood/repeat message, set your personal bot to give a command to nightbot or moobot to add part of the string as a badword, instead of banning them yourself. Again, not the best solution but I don’t foresee nightbot or moobot getting temp globalled any time soon.

You can always apply for the rate-limit whitelist by sending a message to Support which gives your bot a different rate-limit and probably solve your problem. It doesn’t hurt to try so why not?

I have always thought the whitelist for for whispers, not channel messages.

So did I, until Dallas said it is for both Whispers and Messages.

The whitelist for Whispers and IRC are the same. That’s existed since Nov of 2015-ish? Well before my time.

You can apply for it via Support. Not everyone gets whitelisted though. We evaluate each bot on a case-by-case basis. It’s also just an elevated limit for messages, so you’d still have guard rails to work inside of.

I see, but as mentioned each bot is reviewed on a case-by-case basis

Not everyone gets whitelisted though. We evaluate each bot on a case-by-case basis

Which I assume means they look at recent activity and rates. I’ve applied for the white list on that very post but noticed no change in my limits. I understand my bot, 99.999999% of the time, doesn’t need enhanced rate limits and has only rarely breeches the limit. It’s the cases of 500 bots that would require a limit greater than the standard. Maybe ban/timeout could be in a different limit set, that’s significantly higher?

I attempted to help this user by banning these bots by usernames, but now they have changed their naming pattern.

We could start banning by the sentence they use, but the spammer will just remove the consistency and only post random strings, he’s proven he can do that. So as a programmer I am out of options to combat this.

This is a TWITCH issue. The real problem here is the fact that this user is able to create SO many accounts in the first place. @DallasNChains can you please ensure we’re addressing this with the necessary urgency?

One way to prevent this from happening is by not letting viewers use chat without confirming their email address, which can be done by enabling this setting in the “User Settings” page.

You invalidated your own point…

Most bot frameworks include the email verification since so many sites need it, it’s a standard tool for them these days

I actually didn’t knew that most bot frameworks included the email verification tool…
I guess this is a bigger problem than what I was thinking.

It is being addressed.