Stuck in a non-affeliate loop?

Hi, I have been trying for a week to get my extension approverd. This extension lets the viewers use bits to enteract with a game of Pokemon firered. 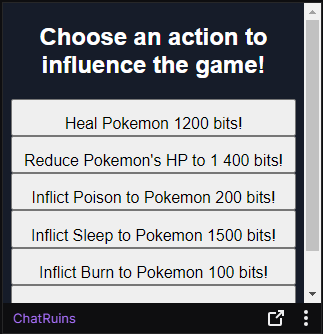 Since I am not an affeliate, I have the twitch.bits.setUseLoopback set to (true) when a channel doesn’t have bits enabled.
I have had my stream running for the last 4 days, and then the review team placed it under pending, in the cause that when they pressed the buttons, they didn’t get any prompt to use bits (loopback set true for me) even though I have been streaming it the whole time and the ingame data changed as they should, which meant they didn’t even look at the stream.

Any tips on how to get out of this loop? Am I really never going to be able to release my work because I am not an affeliate?

A in review/production extension should not have twitch.bits.setUseLoopback in the code, this function is only for local testing. (Mainly for use/testing in the Developer Rig)

As if it’s in released code, no one will ever get spend any bits

You can refer to

We know how important having a high quality monetization experience is for your Twitch Extensions. To help you ship monetized Extensions with a higher degree of confidence, we’re making it easier to test Bits in Extensions on your own channel. Developers can now activate Bits-enabled Extension versions that are in a testing state on their own channel without needing Partner or Affiliate status and Bits used in the Extension won’t be deducted from their wallet. Please note that if you are trying …

thanks for the reply,
at first I didn’t have twitch.bits.setUseLoopback but they sent me this error, so I re-added it This screenshot doesn’t do anything to help disagnose a problem.

I’ve never had this occur on my extensions that use bits, except where I put a call in to use a product that didn’t exist. (see also the test image I linked for testing conditions)

thanks again,
I think the problem was that I didn’t have the products under development, the link helped me

You can use a “real” product as dictated by the testing image.