2 days ago I started noticing this problem, where the API will return really random stats for a channel. This has been screwing with my site, and it’s becoming a pain in the ass…

http://i.imgur.com X6MbaD4.png (put a slash before the X, I can’t put image links)

Here is an example. The image is a screenshot of how they look in our database at the moment. Take a look at their Twitch page. First off, the haven’t ever streamed (so why does it say they were playing HearthStone). They have 0 views, and 0 followers…

The viewers, followers and views are all taken directly from the Twitch API and stored in our database. So the numbers shown are a direct result of what Twitch’s API has returned (or so I’m guessing, since there is nothing in between the API call and the database save).

Again, this only started happening 2 days ago. I’ve had this happen to about 20 different streams so far, and I can’t find anything linking them to each other (a reason as to why this is happening). Not all streams are like this, just a few random ones.

You can view this page to see some streamers, and the screwed up stats (page constantly changing, so it may or may not display a bugged stream).

(With the streamer’s name at the end)

Same issue for me: Inaccurate followers/views values from streams endpoint

All of those streams have the same views & followers data? That seems suspiciously like a bug in your application code. Is it open source so I can take a peek?

I haven’t seen any indication that our API is reporting terribly wrong numbers on a consistent basis. Occassionally we’ll have blips where we report 0 views/followers, or serve stale data, but that’s very rare and shouldn’t be happening on such a widespread basis.

There is a bit more code, I just removed a lot of it (same thing, dif values). As you can see though, I don’t ever edit the value.

You currently have a few streams marked as “live” on your site that aren’t live. All of their data matches the current top stream - Riotgames. This, plus the code you shared, makes me think that in some cases $stream_info['name'] is blank, causing your query to our API to return not one stream object, but all available streams. Then you blindly grab the top stream and run your update query that blindly the database… potentially hitting every row since you don’t escape your variables?

If I had unredacted code I could MAYBE try to guess at the bug, but I’ve very confident that the issue is either in how you’re calling our API, how you’re updating the database, or both. Possible values of $stream_info['name'] would also help.

Hmmm, not sure how that’s possible. I’ll add some debug stuff tonight and let you know what I find.

Also, here is the full script of that function if you want to look it over.

Did you see my reply above? Inaccurate followers/views values from streams endpoint

The data in in the growth trend is a snapshot of the channel at midnight PST.

There looks like there was another bad data point last night 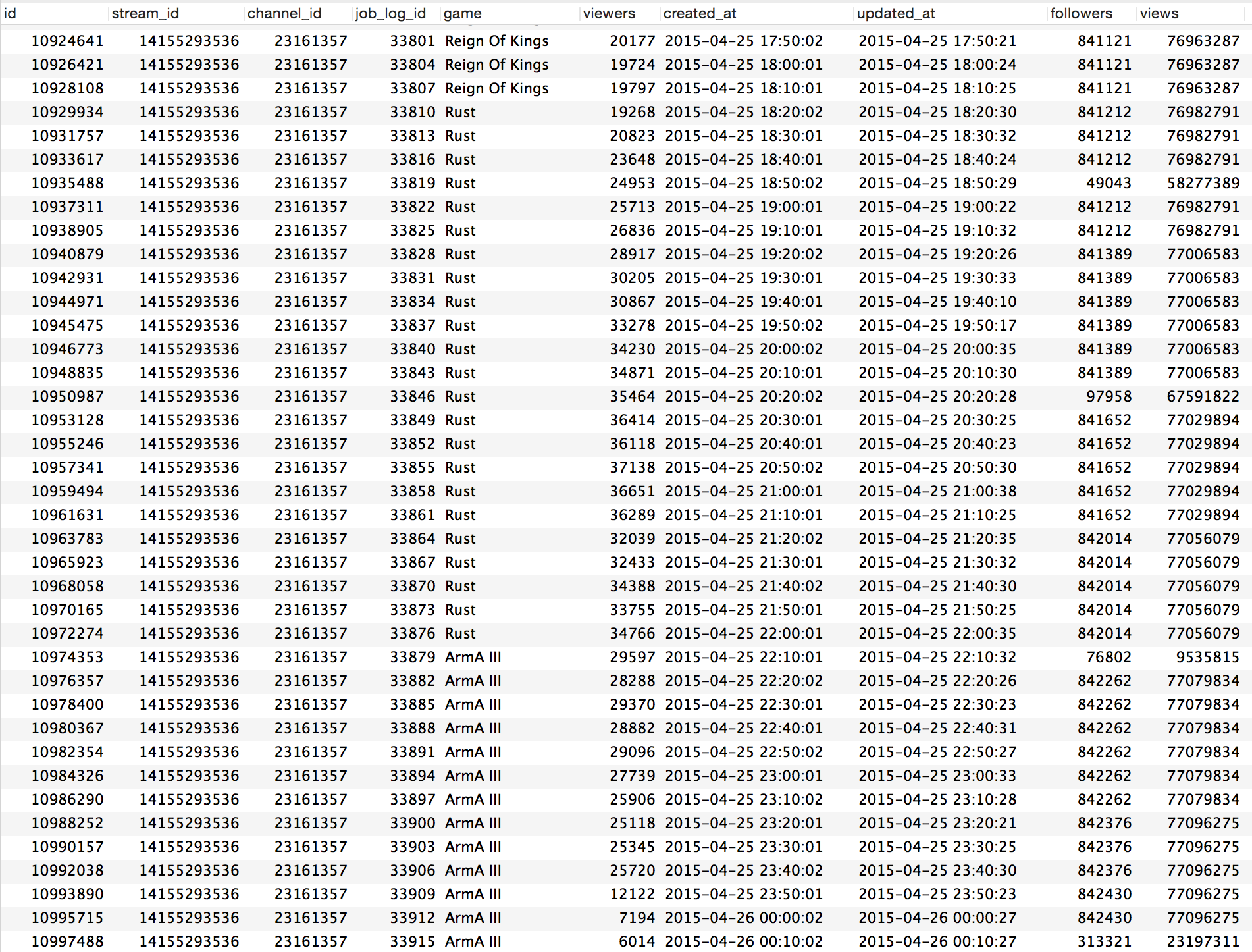 Dug deeper into this, and it looks like this could be related to instances where the API is not returning a followers and views property on the channel. Is this intended behavior? Under what conditions does the API omit that data?

*Looks like a user is being returned instead of a channel. The incorrect values seem to be a side effect of me not properly accounting for the missing values. Maybe you are having the same issue @ManaPot

I can report the same issue as stream object is sometimes missing some values or . for our software to work properly we then have to make a new API call to get the correct data which should be a problem for future rate limits.

Will this be fixed, twitch?

This is a bug that I have already reported. The problem you are experiencing is that the user object is being returned instead of the channel object for the channel requested. Unfortunately this appears to be a caching bug, and as far as I’m aware there’s underlying technical challenges which prevent its immediate possibility of being fixed.

/streams/ returning a user object instead of channel API

This is related to http://discuss.dev.twitch.tv/t/twitch-api-bugged/2073/12 but I've since narrowed down the error and the other thread seems to have gone stale. The /streams/ and /stream/ endpoint is sometimes responding with a user object on the channel property. Seems to happen randomly but it seems to be happening often enough that I can reproduce it every few minutes. I ran some numbers and over the past day, 0.94% (sample size of 192,209) of the stream objects I pulled showed this issu…

I read it and can confirm channel object is often given instead of demanded stream object.