Hi, wondering if anyone has a idea what happens during a MidRoll trigger for the Twitch Video Embed player on Chrome.

All of these errors pop up in console:
Unchecked runtime.lastError: The message port closed before a response was received. 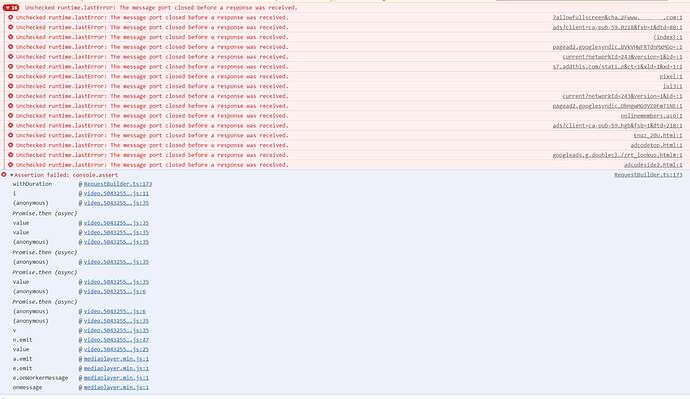 Would this be something server side causing the problem? Is this some cross-site scripting issue? How would you go about fixing this sort of a thing?

I am kinda clueless

What are you actually trying to do?
And what code are you using?
Whats happening that shouldn’t be happened?

Using the Twitch Embed Code, whenever a MidRoll Ad is triggered on a stream, Chrome is showing up all of these console runtime errors and Assertion Fails…

The embed works, video is showing, no ads are playing and overtime these console errors are piling up.

If the stream is playing fine, then there is nothing for you to fix or investigate, as theres nothing broken from a “embedding a Twitch Stream point of view”

Off hand I don’t know if embeds are even supposed to show ads, so I don’t know if this is broken or working as intended. Might be something to flag as a bug, but theres nothing you can do to “fix” it

Its interesting that on “Dec 4, 5” - Ads were playing on embeds, then shutoff again, do you know if any code changes happened on Twitch or browser updates occurred during those days?

It seems very weird that Ads work a couple of days, then its shutoff - its like a test was happening of some sorts.

Its interesting that on “Dec 4, 5” - Ads were playing on embeds, then shutoff again, do you know if any code changes happened on Twitch or browser updates occurred during those days?

No idea. It’s outside the realms of third party developerness.