I agree with Outdoor_IRL that, while it looks to be an awesome feature for many to get viewers coming across the embed to engage more (IE a youtuber’s site has twitch embedded when they are live), there are certain cases where twitch is actually the less full experience. Saltybet comes to mind as well.

Outside of the option to disable it, it would be nice to be able to

I can’t help but see this as an attack on alternative sites to Twitch itself that build themselves around embedded players, and anything less than the ability to disable this “feature” would confirm as much.

Thank you for your feedback, as this is an interesting and unique use case. It is not possible to comment on future plans until testing and analysis is concluded, of course, but we will aim to use the information we learn to balance the needs of creator discovery within embed contexts like yours to make sure they’re effectively assessed when it comes to new features and controls.

Thank you for feedback on this, both for the test itself and these additional modular ideas.

You guys should be focused on Monetizing the Embed player, almost 2 years now its been disabled due to poor reasoning.

This experiment will not do anything positive, if viewers want to go to the Twitch channel, they have the option to do that from the already provided links that are in the embed.

If anything, this should be a Advertisement, that plays for 15 seconds, and then goes away.

You are making it so much harder to use embeds with every update. First “parent” property effectively disabled usage on “file://” origin and ruined my smart tv app, next giant fullscreen purple message appearing every few minutes to leave embed and move to twitch.tv and now permanent info box requiring user to cancel or move to twitch.tv.
Just remove embed already and stop making people angry.

Argh! I work in streaming for an esports company and usually need to have several streams open at once. I use twitchtheater.tv to do this and I pay for Twitch Turbo… now it’s ruined.

I don’t even get the option to cancel. I get a countdown and then the stream is stopped.

Using embeds is getting harder with each update.
I agree with those guys above.
Making such things ruins all the ecosystem built around the Twitch embeds by external developers forcing their users to leave to sites.

It’s ok if you will implement ads inside embed or anti-adblock banners but isn’t this a purpose of embeds to be able to insert the player on any site and build your own product?
Now the embeds are more like “demo streams” rather than a true piece of Twitch inside your site

We are having users reporting at least three variations of this. 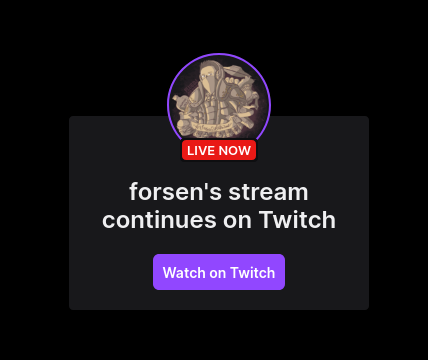 We are having users reporting at least three variations of this.

To quote the OP

These CTAs may appear in a variety of different contexts and configurations.

You’ve listed three different versions of the thing being tested

Thank you for the clarity, Barry.

So, considering two of the tests just completely ruin the stream for the user – one literally stopping it and one blocking the screen with no option to close – what’s really being “tested” here is how much Twitch can get away with just killing embeds completely?

Twitch definitely testing the waters afaic with embeds to see what they can get away with. I wont shut up about this specific thing and I was skeptic towards another Twitch colleague of @tyvick 's in another thread in regards of this too.

These twitch embed experiments, yet again, proof my point. Look, why do these experiments purposely make the experience worse? Get the full experience on Twitch.tv just screams ‘We want our audience fully on our site and will make matters worse for 3rd party sites so it becomes borderline unwatchable’.

I spent months of my free time developing a tool to help people watch Twitch on their favorite multi-viewer sites, but it’s all going to be for nothing if these popups are mandatory on those sites. Please don’t do this. Ugh twitch just ugh

Also, isn’t there literally a “TWITCH” button in the embed if someone wants to go directly to the site? Why add popups and diminish the user experience of the embed when the desired outcome is already present?

Why is this even necessary when the embedded player already has a TWITCH button in it to take the user directly to Twitch? This is exactly how YouTube and other embedded players perform and its fairly common knowledge.

I agree, you can already link to twitch in the embed by clicking their name, or “twitch” and there are already a ton of overlays that make the embed experience bad alone, now this just makes it worse. This is going totally against discoverability. I’ve found so many new broadcasters outside of twitch because of embeds. IF these types of popups are used, it should ONLY be on unauthenticated sessions. If someone is already apart of twitch, and they purposely go outside of twitch to change their experience, they won’t want you bugging them to bring them back.

I agree with the above as well!

I think there are different usecases of Embeds that have very different expectations / requirements to them.

One thing i could see happen: Be similar to OAuth Applications or even Extensions, where a registration is necessary with a traceable point of contact in case the embed gets abused. This allows for the different categories of Embeds to be placed in the different usecases and enhance the experience for everyone involved - if you want to help discover new streamers, you get a CTA, in an Ad, it stops wasting resources after a while and in a Tournament/Marathon/Restreaming environment, no unnecessary UI is blocking the feed.

It restricts access to embeds greatly, but i think it very effectively solves the issues at hand - In My Opinion.

[And just to reiterate: This is just an opinion and a solution that i see that does not come without its own set of issues.]

Thanks for this detailed feedback and consideration. As touched on in the original message, you outline the interrelated and complex potential use cases that this test will hopefully inform in a way that accounts for how to consider each one, both individually and in relation to one another.