Video upload via API broken after introduction of premieres

I created an application that allows batch uploads of video files and have been testing it for a few months without any issues. The application uses APIv5 as there apparently is no way to upload videos using Helix yet. However, today I noticed something strange in my dashboard when trying to publish a video I uploaded yesterday: There is no way to publish it on the website anymore!

I guess this is due to the change of how uploads work now (Premieres).
The official guide states that once you upload a video it should show up as “not premiered yet” and have an option to do so.

This is not the case for me however, as there is no such button shown. For reference, here’s a screenshot of the three possible video states I think exist:

My question now is if this is a bug in the web interface or caused by using the deprecated API (for which no replacement is available currently). Has anyone encountered similar issues so far?

What happens if you click the three dots on the right?

That gives me a menu with following options: 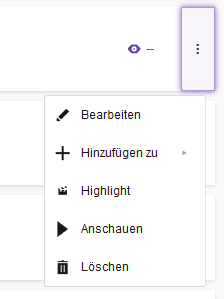 I did some investigation on how the web frontend handles new videos.
When uploading a 6MB test video (using the web interface) I get the “premiere video” option as intended.

It seems like the API called is the same I use: a POST request to https://api.twitch.tv/kraken/videos containing JSON-encoded video parameters:

The only notable difference here is the value create_premiere which is set to true. This undocumented parameter seems to be the reason uploads created the way described in official documentation fail to work properly.

I was hoping that this would be fixed by now. I assumed it was an oversight that should quickly become apparent.

I’ve been transferring over from YouTube for a while so the majority of my uploads are now “stuck”.

I worked around this by issuing API requests to the Update Video endpoint. Although not documented it also allows setting publishing status using viewable and viewable_at the same way as when creating an upload.