What is the proper way to escape emotes in chat?

Right now, I’m facing an issue trying to escape emoticons from being output in chat. For example, when outputting a card, like Shell of the Last Kappa, I don’t want it to output the Kappa face. Is there a way to escape emoticons?

Previously, I replaced things using html entities, like “:)” would be replaced with “&#58;)”. This worked, until mobile app was released, and now users on mobile see “&#58;)”. Is there a proper way to escape emoticons?

You can use an unprintable character anywhere within the emote code to prevent it from being converted to the image, even the start and end.

From what I can see, Twitch strips the non printable characters out, and still displays emotes. Can you give me an example?

Kappa. and Kappa, also fail to draw the Kappa as a side note.

So if you send a “Shell of the Last Kappa,” like I direct copy pasted from your OP that will fail to draw. (Basically follow the card name with punctuation). Unrpintables probably work best, or swap the K for the unicode K equivalent.

(Spammers like to swap the K or the first a for the unicode equivalent with “OMG My Kappa not working”, at which point I usually punch them in the face for promoting channel spam)

The punctuation that was in my OP was intended for this post. This is how it looks when I output it into chat: 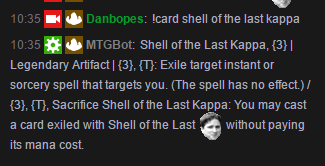