Why was '&cdn' query string removed?

I would like to get an answer from staff or anyone who knows about the removal of the ‘&cdn’ query string.

Me and many people using the guide I posted on Twitch subreddit a few weeks ago were using it to fix the buffering.


Now we can’t watch thanks to that.

Why was it removed? Can we get it back?
Is there any other way to switch the video server?

Now that &cdn is no longer available, can we get an API call to receive the .m3u8 playlist on chosen by us server/node?

First, you posted this in the API section. This is meant for help with the API, not stream support.

&cdn is just the flag for the CDN (Content Delivery Network) setting in a URL.

Level3 provides CDN service but the past few days it has been experiencing issues. (http://www.neowin.net/news/level3-suffering-major-outages-effects-are-felt-worldwide ) If you access the site normally and have a problem you should figure out what that problem is instead of manually choosing a CDN PoP (point of presence). They automatically place you on the closest PoP they can. They also most likely account for saturation if they have multiple PoPs in your area. If buffer continuously to your local PoP I suggest reaching out to twitch by reporting a video issue with any stream you have an issue with. Also, if you get no issue using a PoP you set manually maybe you should complain to your ISP about having a bad network and crappy routes.

TL;DR - I don’t suggest try to fix something you don’t understand using a bypass. Figure out the actual problem and solve that.

PS: Using a proxy or VPN in another nearby region will probably get you placed on a CDN close to the VPN/Proxy.

I don’t like how you assume I don’t understand what I am doing.

I posted in API because it was the closest section to what I’m asking about (and your message does not answer my question or help with my issue).

Everything you wrote, except the Level3 having issues, I already know, but I have like 15 other servers I’d switch to in case level3 died. Why would you recommend me VPN or proxy, if I could just setup a simple redirect using the &cdn like I did for last 6 months?

I asked if there is any other way to accomplish the same as using &cdn (now obsolete) - including API calls.

I already contacted my ISP several times, so probably did people who have similar issues. They aren’t helpful, and most of them don’t know what I am talking about, or they give me excuses like “it’s impossible” to fix the route.

I was using &cdn for more than 6 months. I posted the guide on reddit 2 weeks ago, staff removed the &cdn 3 days ago. I ask why and if there’s any way to do the same without VPN or proxy, with API.

If you access the site normally and have a problem you should figure out what that problem is instead of manually choosing a CDN.

If buffer continuously to your local PoP I suggest reaching out to twitch by reporting a video issue with any stream you have an issue with.

I did. They weren’t helpful, so I was using &cdn to other servers (like California or Level3).

I apologize, I wasn’t saying you didn’t know what you were doing. I was suggesting you didn’t know what the problem was and that you were putting a band-aid on it instead of getting the issue resolved. The band-aid I might add, isn’t probably meant to be manually set. Settings like that can change without warning and shouldn’t be considered a ‘production’ solution to another issue. If a bunch of users are all manually setting the same CDN they may saturate it and cause even more problems. The PoP sites are ‘most likely’ to be automatically routed to local users.

-I apologize for not having an answer about why the url setting &cdn was removed.-

Yeah, I’m salty they removed it. I know what you mean about the fixing, but it’s not that easy in all cases. Some ISPs don’t take requests or listen to people about peering or route fixing. Each PoP has multiple servers, like fra01 has servers from video03 to like video60, same for Prague, France etc. Level3 has three I think.

It was just a temporary solution I wanted to share with others, since there’s no visible response from ISPs and Twitch.

I hear ya. I do believe the CDN issue is related to the Level3 issue. Until there is a formal announcement we can only assume. From what I saw posted by Level3 they claimed to have resolved the issue. I’m supposed to hear back from Level3 tomorrow to figure out what really did happen with them. If you care to know I could shoot you a message when I find out.

I sometimes forget that not everyone has several servers just lying around. For me it’s almost easier to just add a route for twitch’s IP range to use a specific tunnel, than to change my URL to select a CDN.

The way it worked was that the CDN specified server (eg. &cdn=video20.dfw01.hls.ttvnw.net) was changing the insides of the M3U8 playlist. Adding the server specified by CDN to the path of each TS (video) element.

Here’s M3U8 Playlist with CDN (before they removed it):

And here is M3U8 playlist with CDN removed: 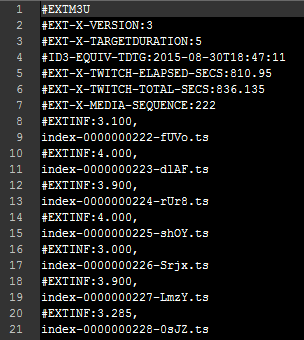 This forces the player to use local server, ignoring CDN.

When I meant CDN related I figured twitch realized people were getting horribly stuck/buffering while the CDN with level3 was acting up, so as a quick fix, they removed it. In which case they might add it back after testing it again or setting up a different backup method.

I hope they add it back.