I have a question: previously I’ve used https://player.twitch.tv/js/embed/v1.js to get interactive embeds. But I’m seeing that now V5 is available. How can I get interactive iframes with the latest version, since the other one will be deprecated (or it is already).

Got it. I didn’t see the script reference there. Thanks.

And last question: can I use the play() method immediately without any issues after the player instantiation? 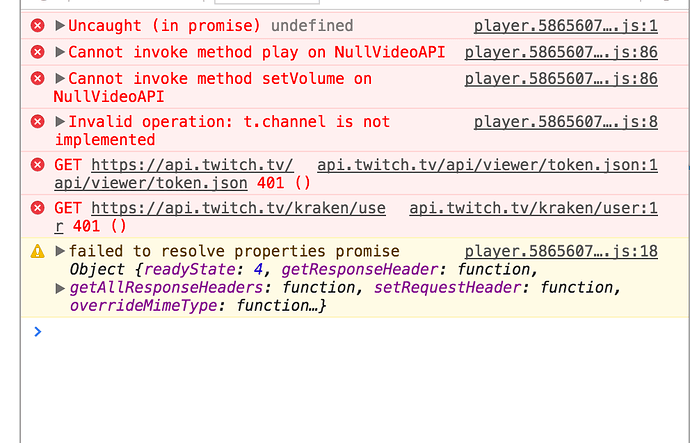 I’ve tried without success. My test is on this Fiddle: https://jsfiddle.net/a6m5s0np/

If there’s a way, any hints will be appreciated it. Thanks

Use the event listeners to check when the player is ready.

The video ID needs to be prepended with a v v109.... Works fine after adding that one letter.

Thanks. I forgot about that.

@3ventic And what if the autoplay attribute is set to false? That way not even with the READY event works.
See https://jsfiddle.net/a6m5s0np/2/

Not sure, but why would you set autoplay false if you want to play it automatically?

@3ventic Because I want to get the player ready and then, if a flag is passed by my code, it can be played. Otherwise, it won’t

Would it be possible to set the autoplay true/false based on that flag instead?

@3ventic Unfortunately, it is not possible. I have to set it up autoplay: false and then the flag might be set by the user so it has to be ready that way. Isn’t there another alternative for this?